Euro Has Chance to Build on Gains as Liquidity Returns; CPI on Thursday 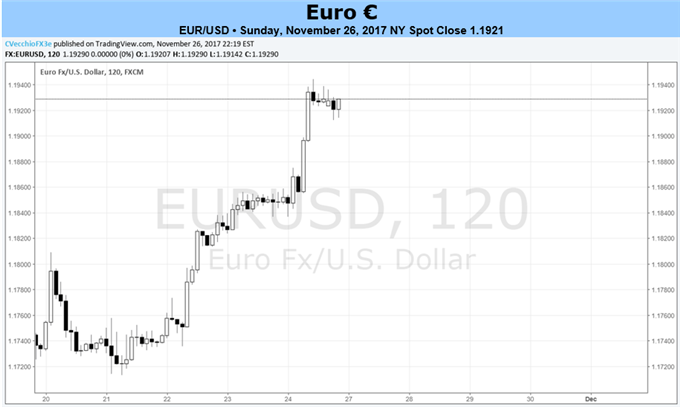 - The Euro continues to excel as its own economic data trends have firmed up, giving investors a new incentive to get long (besides getting away from other major currencies).

- Positioning data hasn’t been updated due to the US holiday; the latest CFTC’s COT report, from November 14, showed that speculators have were practically done shedding net-long Euro contracts.

The Euro was the best performing major currency of the week during suboptimal liquidity conditions around the US Thanksgiving holiday. EUR/USD was the best performing cross, gaining +1.20%, while EUR/NZD was the worst, still up by +0.23%. Euro-Zone PMI readings released on Wednesday showed that the region was growing at its fastest pace since the first half of 2011.

Coupled with signs that Germany’s political upheaval will likely pass with any lasting consequences, the Euro has been all but given a ‘green light’ to keep climbing in the days ahead – particularly against a struggling currency like the US Dollar (falling headline US CPI, uncertainty over tax reform) if the November Euro-Zone Consumer Price Index release on Thursday shows a rebound in inflation (+1.6% expected from +1.4% (y/y)).

Otherwise, the calendar is essentially a non-issue this week; the OECD forecasts due on Tuesday are a nice discussion point, but won’t have any ramifications beyond their immediate release.

Overall, the Euro continues to prove resilient amid steadily improving fundamentals of the Euro-area. Economic data momentum took a sharp swing higher last week, with the Euro-Zone Citi Economic Surprise Index finishing Friday at +92.9, up from +58.9 last week and +54.1 a month ago. Concurrently, this is the highest reading in the CESI since August 2010.

Elsewhere, the 5-year, 5-year inflation swap forwards, one of ECB President Draghi’s preferred gauges of price pressures, closed last week at 1.656%, slightly higher than the 1.645% reading a week earlier, and still higher than the 1.653% reading a month ago. Given broad Euro strength over the past few months, any signs that inflation is trending higher will ease ECB concerns over taper the pace of its asset purchases as the calendar turns into 2018.

For now, the last week of November shouldn’t present any new obstacles that derail the Euro’s recent swing higher.