Euro Looks to Hold onto Gains During US Holiday Week 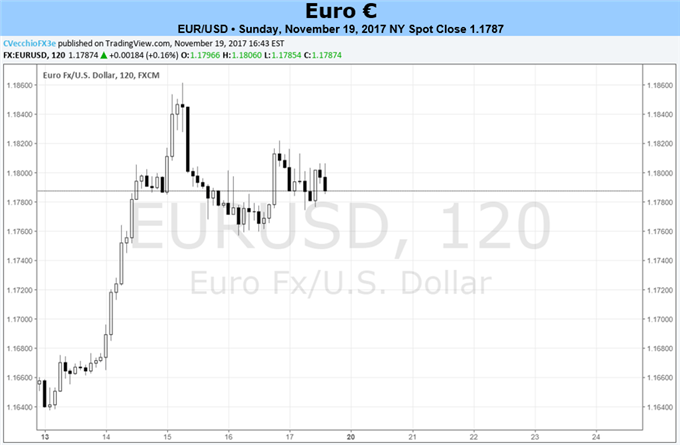 - The Euro is proving resilient as economic data trends continue to hold up quite well as pockets of negativity have popped up for many other major currencies.

- Retail positioning points to bullish conditions for EUR/USD in the coming days.

The Euro was the second best performing major currency of the week as the calendar turned through the ides of November, with EUR/JPY the only EUR-cross that fell on the week (-0.20%). Euro gains were far and wide elsewhere, with EUR/USD adding +1.06%, EUR/AUD gaining +2.31%, and EUR/NZD surging by +2.89%. Despite no major catalysts coming out of the region, the relative stability the Euro has proven an appealing characteristic in recent weeks.

Overall, the Euro is continuing to prove resilient amid steadily improving fundamentals of the Euro-area. Economic data momentum remains positive, with the Euro-Zone Citi Economic Surprise Index finishing last week at +58.9, the same level as a week earlier and up from +54.1 a month ago.

The 5-year, 5-year inflation swap forwards, one of ECB President Draghi’s preferred gauges of price pressures, closed last week at 1.670%, slightly lower than the 1.679% reading a week earlier, and still higher than the 1.648% reading a month ago. Given broad Euro strength over the past few months, any signs that inflation is trending higher will ease ECB concerns over taper the pace of its asset purchases as the calendar turns into 2018.

Looking ahead, the economic calendar over the coming week will be impacted by holidays in the United States, meaning liquidity will be running thinner than normal. Likewise, there are only a few upcoming instances to look for new guidance on the Euro.

On Monday, European Central Bank President Mario Draghi will be speaking in his capacity as Chair of the European Systemic Risk Board (ESRB). On Thursday, when US markets will be completely offline, preliminary French, German, and broader Euro-Zone PMI readings will be released and are expected to show economic activity in various sectors continuing at the same pace it was in October.

The coming week shouldn’t be much of a game changer for the Euro, and in recent years, the trading conditions during the Thanksgiving holiday have proven to be unreliable and inconsistent. Traders may find conditions palatable from Monday to Wednesday, but the tail-end of the week may be best spent away from looking for significant price movements in FX markets – unless of course the news wire yields something unexpected.