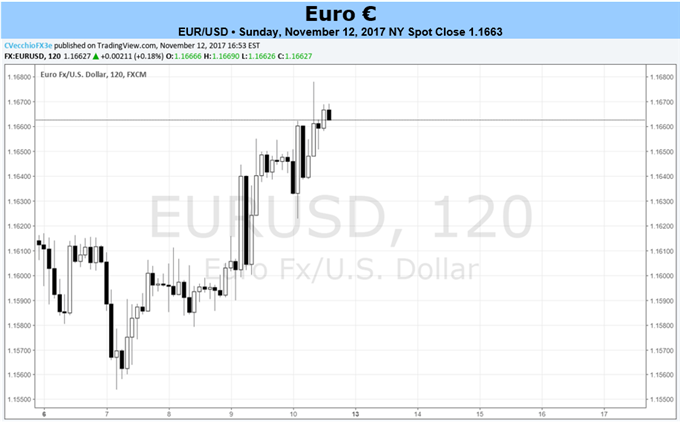 - The Euro was among the top performers last week, as a lack of negativity surrounding the single currency gave it ample room to recover versus others dealing with simmering issues (Brexit, US tax reform).

- Positioning data for the week ending November 7 was not released last Friday; will be released on November 13.

- Retail positioning points to mixed conditions for EUR/USD in the coming days.

The Euro had a better performance in the second week of November, even as the quieter economic calendar left the single currency at the whims of influences coming from other major currencies. EUR/USD was the top performing EUR-cross, for example, as details surrounding progress of tax reform legislation in the United States proved disappointing. EUR/GBP, on the other hand, was the worst performing EUR-cross, as positive developments in the Brexit negotiations eased pressure after the Bank of England’s policy meeting.

The coming days offer a few opportunities for event-driven volatility in the Euro, at least more so than last week; neither the best or worst performing EUR-crosses saw gains outside of +/- 0.5%. The Euro-Zone economic calendar is littered with over two dozen individual data releases, but none seem destined to significantly alter the trajectory of the Euro. Nevertheless, two releases are worth watching for.

First, on Tuesday, the second Q3’17 Euro-Zone GDP reading is expected to confirm the +2.5% annualized rate initially reported, but given some of the individual countries’ expected GDP readings – Germany, France, Italy, and Spain – it is possible that a beat is in the cards. On Thursday, the final October Euro-Zone CPI report is due, and is expected to show a decline in price pressures from +1.5% to +1.4% (y/y).

Perhaps the most interesting event on the calendar in the coming week is the round table discussion being held on Tuesday in Frankfurt, Germany, featuring ECB President Mario Draghi, Fed Chair Janet Yellen, and Bank of Japan Governor Haruhiko Kuroda. It’s not necessarily the forum in which new policies would be revealed, and just two weeks away from the October policy meeting, it seems highly likely that Draghi will use his speaking time to reflect on the extraordinary monetary policies employed since the Global Financial Crisis.

Overall, the Euro is proving resilient thanks to study and steadily improving fundamentals of the Euro-area. Economic data momentum remains firm, with the Euro-Zone Citi Economic Surprise Index finishing last week at +58.9, up marginally from +58.7 a week earlier and up from +55.7 a month ago. On the price pressures side, the 5-year, 5-year inflation swap forwards (one of ECB President Draghi’s preferred gauges) closed last week at 1.679%, higher than the 1.659% reading a week earlier, and still higher than the 1.639% reading a month ago. Given broad Euro strength over the past few months, any signs that inflation is trending higher will ease ECB concerns over taper the pace of its asset purchases as the calendar turns into 2018.

For now, despite the Euro-Zone economic calendar proving saturated over the coming week, the lack of significant top line events means the Euro will be largely driven by developments unfurling for other currencies, like headlines around the Brexit negotiations or tax reform in the United States.