Euro Will Look for Drivers Beyond the Economic Calendar This Week 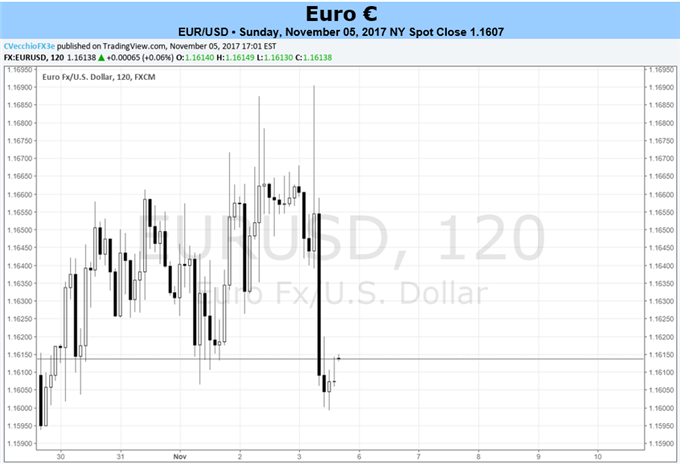 - The Euro finished in the middle of the pack last week, not much of a surprise considering it was left without many significant fundamental drivers.

- According to the CFTC’s COT report, net-long Euro positions are down by -26% from their high set during the week ending October 10.

The Euro had neither a good nor a bad week as the calendar turned into November, as the rather empty economic calendar left the single currency adrift without much direction in the wake of the European Central Bank’s October policy meeting. Accordingly, much of the Euro’s movement was determined by events surrounding the other major currencies, such as the Bank of England rate decision or the October US Nonfarm Payrolls report.

Elsewhere, the 5-year, 5-year inflation swap forwards, a measure of medium-term inflation (and one of ECB President Draghi’s preferred gauges) closed last week at 1.659%, slightly lower than the 1.668% reading a week earlier, but still higher than the 1.652% reading a month ago. Given broad Euro strength over the past few months, any signs that inflation is picking up will do great service to ease ECB concerns over taper the pace of its asset purchases as the calendar turns into 2018.

Even though the European Central Bank announced that it would be tapering its QE program starting in January, market participants had fully priced this eventuality into the Euro, and have continued to take profit after a multi-month rally. With no significant new bullish catalysts last week, and none in the week ahead, speculators cut their net-long Euro positions for the third consecutive week to 72,097 net-long contracts per the CFTC’s COT report, down -26% from the high watermark set the week ending October 10, 2017.

Without new reasons to engage on the long side, it is possible that positioning eases further in the days ahead. Yet if last week was a template for what a week looks like without significant developments on the Euro side of the equation, then EUR/GBP may be able to rally as markets digest the BOE’s latest policy decision and its implication for UK rates, or EUR/USD may be able to continue falling as US Treasury yields edge higher.

While the ECB’s disposition towards more Euro gains may be negative, it is not openly advocating for Euro weakness. Accordingly, while the broad market bias may have turned bearish on the Euro in the near-term, its losses may not run too deep without new catalysts at home and abroad.