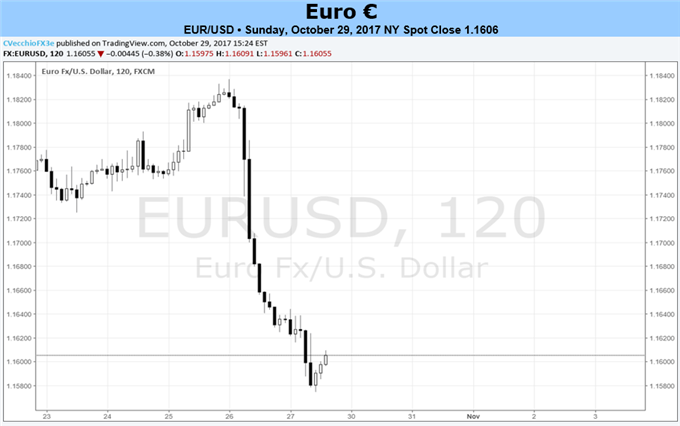 - The Euro was smashed lower after the ECB policy meeting on Thursday, finishing lower against all but one major currency.

- According to the CFTC’s COT report, net non-commercial Euro longs fell by -8% down from their highest level since May 2011.

The Euro had its second worst week of the year, finishing second to last among the major currencies covered by DailyFX Research. EUR/USD was the worst performing EUR-cross finishing -1.52% lower, while EUR/AUD finished positive, up by +0.30%. The European Central Bank’s policy meeting on Thursday was the clear catalyst for the sharp losses at the end of the week, as the overarching message of low rates was made clear: like the Federal Reserve did once it ended its QE program, the ECB will keep its interest rates on hold at present levels for "an extended period of time" after its QE program ends.

Even though the current taper sets the QE program to run to September 2018, ECB President Draghi made clear that it is possible that the ECB extends its QE program beyond said date, including another incremental tapering in the process. Noting that an "ample degree of stimulus is still needed," Draghi pointed to "domestic price pressures [remaining] muted" and that "core inflation has yet to show convincing upward trend" to justify the ECB's patience on rates.

Evidently concerned by some of the risks surrounding the ECB's forecasts, Draghi noted that "downside risks to growth include FX developments." Draghi may have effectively put a ceiling over the Euro, suggesting that further gains will be met with animosity and resistance by policymakers.

Looking to the coming week, there are a few important releases that will help shape expectations for the EUR-crosses moving forward. On Tuesday, the initial October Euro-Zone Consumer Price Index will be released, expected to come in unchanged relative to the preliminary reading at +1.5% y/y. The 5-year, 5-year inflation swap forwards, a measure of medium-term inflation (and one of ECB President Draghi’s preferred gauges) closed last week at 1.668%, up from 1.648% the week prior, and up from the 1.618% reading a month ago.

Aside from the recent friction in Catalonia, Spain, indicators are all trending in the right direction for the Euro. Euro-Zone economic data remains strong relative to analysts’ expectations, as measured by the Citi Economic Surprise Index. The Euro-Zone CESI increased to +59.5 at the end of the week, up from +54.1 a week earlier, and up sharply from +50.2 on September 29. The scope of recent economic growth will be made clear on Tuesday as well, with the initial Q3’17 Euro-Zone GDP report due in at +2.3% annualized.

If the Euro wants to pump the brakes on its recent skid, it needs upcoming data releases simply to meet consensus, as both growth and inflation expectations have been trending positively for several weeks now. While the ECB’s disposition towards more Euro gains may be negative, it is not openly advocating for Euro weakness. Accordingly, while the broad market bias may be turning bearish on the Euro in the near-term, its losses may not run too deep.