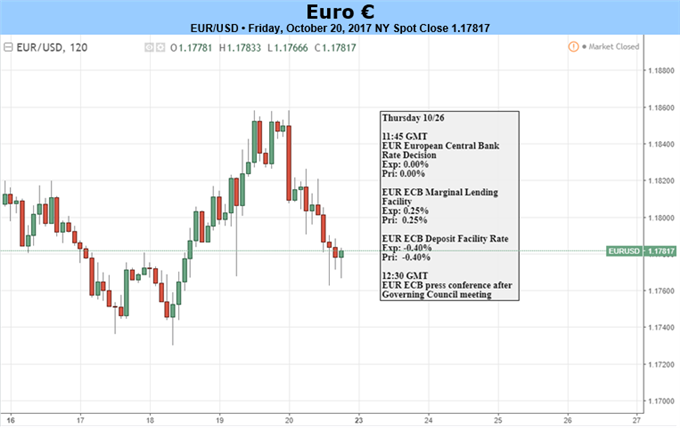 EUR: ECB To Announce Start of Tapering, Will Avoid Any Surprises

Euro trading in the coming week will be dominated by Thursday’s meeting of the European Central Bank’s Governing Council, which is set to announce a tapering, or reduction, of its monetary stimulus program for the Euro-Zone economy from January next year.

The consensus forecast is that it will halve its asset-purchase program to €30 billion per month from €60 billion and extend it by nine months from January. It will also likely stress that an interest rate increase is still beyond the horizon, and that the program could yet be either increased or decreased. The ECB will want to avoid surprising the markets – which is why our forecast for the Euro is neutral – but, as always, the devil will be in the detail.

The ECB could, for example, announce that it will buy a lower proportion of government bonds in its total asset purchases and it could also announce that it is prepared to buy bonds with longer maturities than it does at present. There are other, albeit less likely, possibilities too.

It could, for example, unveil a longer-term plan to reduce its purchases to zero by next September, perhaps in three steps of €20 billion, or it could announce that it is reducing its purchases by more than €30 billion but will be buying bonds for longer. As always, the press conference by ECB President Mario Draghi after the announcement will be just as important as the actual decisions.

Elsewhere, the political turmoil in Catalonia has so far hit Spanish stocks rather than the Euro and that looks set to continue. Arguably, the currency could yet be weakened by the imposition of direct rule by the central government in Madrid, a forced election in Catalonia designed to overthrow the pro-independence regional government and possible demonstrations in the streets of Barcelona, the Catalan capital. However, those are long-term rather than near-term concerns.

On the data front, the provisional purchasing managers’ indexes on Tuesday and the Ifo Institute’s business climate indicator for Germany on Wednesday could be influential, as could the European Commission’s economic forecasts released on the same day.

The composite ‘flash’ Euro-Zone PMI will likely be little changed, perhaps easing to 56.5 from 56.7 in September, while the Ifo business climate index could well hold steady at 115.2.