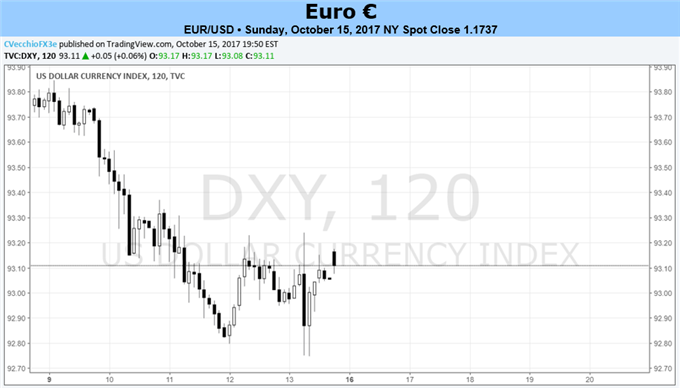 - According to the CFTC’s COT report, net non-commercial Euro longs rose back to their highest level of the year during the week ending October 10, 2017, and the highest since May 2011.

- Retail positioning points to mixed trading conditions for EUR/USD in the coming days.

The Euro had another middling week, finishing dead in the middle among the major currencies covered by DailyFX Research. Whereas EUR/USD was the worst performing EUR-cross and EUR/GBP was the best performing EUR-cross in the first week of October, the opposite was true this past week: EUR/GBP lost -0.90% and EUR/USD gained +0.76%.

While the light economic calendar apparent through October will continue for most of the coming week, there are a few important releases that will help shape expectations for the EUR-crosses ahead of the European Central Bank policy meeting the following week.

Mainly, the final September Consumer Price Index on Tuesday, expected to come in unchanged relative to the preliminary reading at +1.5% y/y, will keep the path clear for the ECB to announce a taper to its QE program as soon as October 26. The 5-year, 5-year inflation swap forwards, a measure of medium-term inflation (and one of ECB President Draghi’s preferred gauges) closed last week at 1.639%, down from 1.652% the week prior, but up from the 1.605% reading a month ago.

Ahead of the October ECB meeting, aside from the recent friction in Catalonia, Spain, indicators are all trending in the right direction for the Euro. Euro-Zone economic data remains strong relative to analysts’ expectations, as measured by the Citi Economic Surprise Index. The Euro-Zone CESI increased to +55.7 at the end of the week, up from +45.8 a week earlier, and up sharply from +18.4 on September 15.

Considering that Euro-Zone economic data trends and inflation expectations remain firm, there is little reason to believe that the ECB Governing Council’s opinion regarding the state of the Euro-Zone economy and the need to taper their QE program will have changed that much in recent weeks, or will change that much before their next meeting on October 26.