Euro's Quiet Calendar Means Other Currencies are in Control 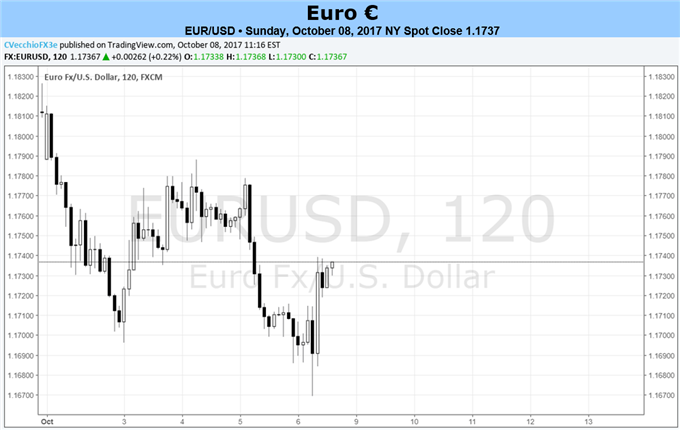 - According to the CFTC’s COT report, net non-commercial Euro longs rose back to their second highest level of the year during the week ending October 3, 2017.

- Retail positioning has shifted dramatically in EUR/USD in recent days, with sentiment pointing towards the potential for more downside.

The Euro had another fairly unremarkable week of data and news flow, finishing in the middle of the pack among the major currencies covered by DailyFX Research. As the calendar turned into October and the fourth quarter, much of the Euro’s movement was the result of thematic influences for other currencies: UK Prime Minister Theresa May losing power and Brexit concerns rising; and Fed rate hike speculation surrounding the September US Nonfarm Payrolls report.

Overall, Euro-Zone economic data remains strong relative to analysts’ expectations in recent weeks, as measured by the Citi Economic Surprise Index. The Euro-Zone CESI eased to +45.8 at the end of the week, down from +50.2 a week earlier, but up sharply from +19.6 on September 8.

Taking a look at price pressures, the 5-year, 5-year inflation swap forwards, a measure of medium-term inflation (and one of ECB President Draghi’s preferred gauges) closed last week at 1.652%, higher than both the 1.618% reading a week earlier the 1.605% reading a month ago.

For the second week in a row, a quiet economic calendar leaves the Euro without significant drivers. Generally, the focus remains on the run-up to the October 26 European Central Bank policy meeting. As the September ECB meeting minutes showed, policymakers are almost ready to announce a reduction in the central bank’s stimulus measures. Notably, with ECB officials concerned about additional Euro strength, it seems that a taper to the QE program would be complemented by a shorter time horizon for the extension.

With Euro-Zone economic data trends and inflation expectations firming up, there is little reason to believe that the ECB Governing Council’s opinion regarding the state of the Euro-Zone economy and the need to taper their QE program will have changed that much in recent weeks, or will change that much with the light calendar ahead.