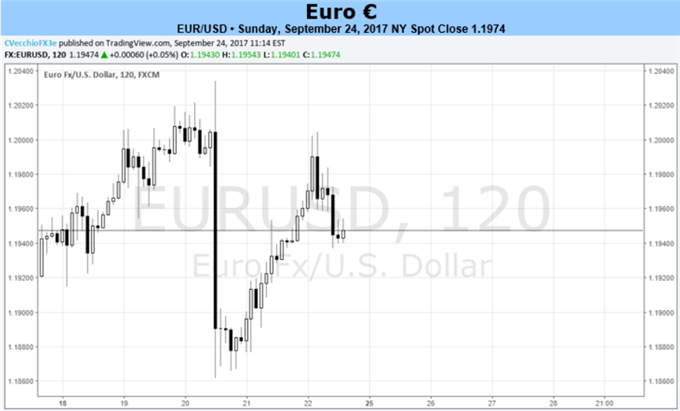 - The Euro was the second best performing major currency last week, although EUR/USD only added +0.05%.

- According to the CFTC’s COT report, net non-commercial Euro longs fell for the second consecutive week to their lowest level since mid-May.

- Nearly 70% of retail traders remain net-short EUR/USD, suggesting a top may not be in play yet.

The Euro gained ground against all but one major currency last week – the New Zealand Dollar – amid what was a fairly unremarkable flow of data and news, for better or for worse. Much of the Euro’s movement was determined by events surrounding the other major currencies, such as the Federal Reserve’s September policy meeting or UK Prime Minister Theresa May’s Brexit press conference.

The little data that there was for the Euro last week turned up positive, helping support the single currency. The preliminary French, German, and Euro-Zone PMI readings for September beat nearly across the board, underscoring the continued shift forward in growth momentum in the Euro-area during 2017. Accordingly, the Euro-Zone Citi Economic Surprise Index, a gauge of economic data momentum, jumped up to +49.4, its highest level since the last week of May.

Elsewhere, the 5-year, 5-year inflation swap forwards, a measure of medium-term inflation (and one of ECB President Draghi’s preferred gauges) closed last week at 1.608%, slightly lower than the 1.620% reading a week earlier but higher than the 1.588% reading a month ago. This bodes well for incoming inflation data on Friday, the only significant Euro-Zone economic data of the week, which is supposed to show that the preliminary September Euro-Zone CPI reading ticked up to +1.6% from +1.5% (y/y).

Given broad Euro strength over the past few months, any signs that inflation is picking up will do great service to ease ECB concerns over reducing its monetary stimulus. Even though the European Central Bank continues to send signals that it will be announcing a taper to its QE program at some point in the next few months, perhaps as early as October, it seems that market participants have fully priced this eventuality into the Euro, and have started to take profit after a multi-month rally.

With no significant new bullish catalysts last week, speculators cut their net-long Euro positions for the second consecutive week to 62,753 net-long contracts per the CFTC’s COT report - the smallest net-long position since the last week of May. Without new reasons to engage on the long side, it is possible that positioning eases further in the days ahead.

Yet if last week was a template for what a week looks like without significant developments on the Euro side of the equation, than pairs like EUR/GBP or EUR/JPY may be given further room to rally as issues surrounding the British Pound and Japanese Yen flare up. Looking ahead to a quieter four days ahead before the inflation data on Friday, the Euro is still very much left to the whims of the other major currencies during the last week of September.