Euro Turns to CPI, PMI Data Ahead of German Elections 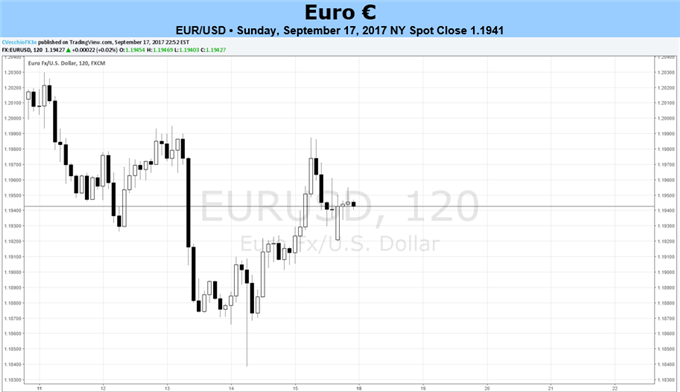 - The final August Euro-Zone CPI reading on Monday should show a modest increase from the preliminary reading, in line with what have been rising medium-term inflation expectations.

- German elections next weekend pose little risk to the Euro as German Chancellor Angela Merkel is expected to win another term with relative ease.

- According to the CFTC’s latest COT report, net-long Euro positions among speculators fell by over -10% through the week ended September 12.

The Euro gained ground against the Japanese Yen and the Swiss Franc last week, but that was it; all of the other major currencies gained ground versus the Euro. By the looks of it, even though there are several notable events due out on the calendar ahead, the Euro may not be in the driver’s seat of its own destiny.

Even though the European Central Bank sent strong signals that it would be announcing a taper to its QE program just days earlier at their September policy meeting, it seems that market participants have fully priced this eventuality into the Euro, and have started to take profit after a multi-month rally: with no new bullish catalyst last week, speculators cut their net-long Euro positions

Generally, however, fundamental drivers for the Euro appear to be moving in the right direction – helping keep traders in a ‘buy-the-dip’ mindset with regards to the Euro. Euro-Zone economic data has been modestly outperforming expectations, as measured by the Citi Economic Surprise Index. The Euro-Zone CESI inched up to +18.4by the end of the week, up from +9.9 a month earlier. We’ll see if this positive data momentum has translated into improvement in growth conditions with the release of the preliminary September Euro-Zone (and individual country) PMIs on Friday.

Elsewhere, the 5-year, 5-year inflation swap forwards, a measure of medium-term inflation (and one of ECB President Draghi’s preferred gauges) closed last week at 1.620%, higher than the 1.591% reading a month ago. This bodes well for incoming inflation data on Monday, which is supposed to show that the final August Euro-Zone CPI reading ticked up to +1.5% from +1.3% (y/y). Given broad Euro strength over the past few months, any signs that inflation is picking up will do great service to ease ECB concerns over reducing its monetary stimulus.

At the tail end of the week, attention for the Euro will shift to the German general election, which has been a non-issue: German Chancellor Angela Merkel, the steward of the Euro during its dark years after the Global Financial Crisis, looks like she will comfortably win. The Catch-22 is that her main political rival in the election, Martin Schulz, is equally if not more pro-European fiscal integration that she is. Either way, the next chancellor of Germany will be someone who isn’t a Eurosceptic.

Accordingly, with the September FOMC meeting this Wednesday, it appears that the Euro is ready to be overshadowed, not due to a lack of important fundamental drivers on its own side, but simply because the outcomes resulting from upcoming events and data on its side appear already priced in.