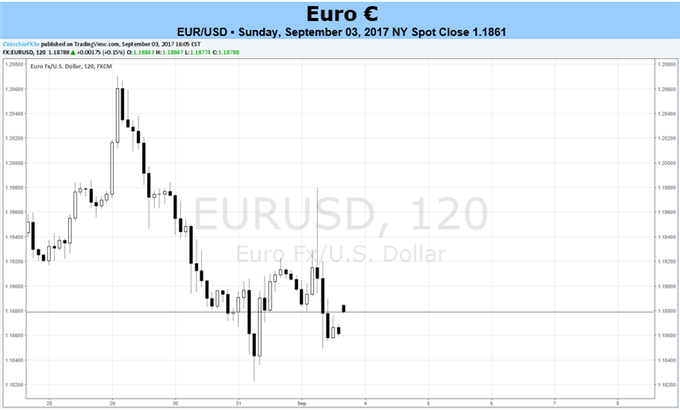 - EUR/USD traded to fresh yearly highs last Tuesday, but closed the week in the red after the August US NFP report on Friday.

- The next move in the Euro will be wholly determined by what happens at the European Central Bank’s September policy meeting this Thursday.

- Retail positioning continues to indicate that positioning is stretched in EUR-crosses, but the trend hasn’t capitulated yet.

The Euro had a rather dreary week, finishing squarely in the middle of the pack in terms of performance among the major currencies covered by DailyFX Research. Yet the trading conditions were typical for this time of year, the last week of summer: low volatility, even lower participation, and few meaningful drivers of price action that could upend trends in the market. All of that will change once we get past Labor Day in the United States on Monday, and the Euro will be front and center.

The European Central Bank policy meeting this coming Thursday is one of the four meetings each year that new staff economic projections (SEPs) are produced, which raises the stakes considerably for the week ahead. Yet unlike the past few policy meetings, where even the releases of the SEPs felt more like placeholders than anything, the coming rate decision this Thursday could have material consequences that span beyond the next few days.

To understand where the ECB might take us this week, it’s important to understand the context of where we’ve been in recent months.With the ECB quiet for some time about the FX channel, the Euro had been given some breathing room to rally against its peers since April, when political risk in the Euro-Zone dissipated alongside Marine Le Pen’s French presidency hopes. Now that EUR/USD has traded above 1.2000 as recently as last week, the ECB simply can’t afford to stay quiet on the FX channel any longer.

Why? Per the last SEPs issued at the ECB’s June policy meeting, the ECB’s technical assumption for EUR/USD in 2017 is 1.0800. Were EUR/USD to stay around these current levels through the end of 2017, the exchange rate could knock off around -0.5% from headline inflation and -0.1% to -0.2% off of headline GDP (vis-à-vis exports). Considering that growth in the Euro-Zone has just started to hold above +2%, and CPI is barely over half of the ECB’s +2% target, any further Euro strength (particularly in EUR/USD) will only complicate the ECB’s ability to achieve its policy goals. From this perspective, the biggest impediment to further Euro gains may actually be the Euro itself.

The developments over the past few months leave ECB President Draghi in a precarious situation. How the Euro will react this week can be placed on a continuum. At the most ‘bullish end’ of this continuum would be for the ECB to surprisingly announce its QE taper and downplay any concern about further Euro appreciation. At the most ‘bearish end,’ the ECB would downplay tapering its QE program and ECB President Draghi would spend a significant portion of his press conference discussing the risks a rapidly rising Euro poses to the ECB’s policy goals.

The ongoing improvement in the Euro-Zone means that is likely to balance out his short-term concern over Euro strength with medium-term hopes that growth conditions will continue to improve. Ultimately, this may mean that the ECB decides to forego announcing the next phase of its QE taper at its meeting this week and punt on that decision until the next round of SEPs in December.