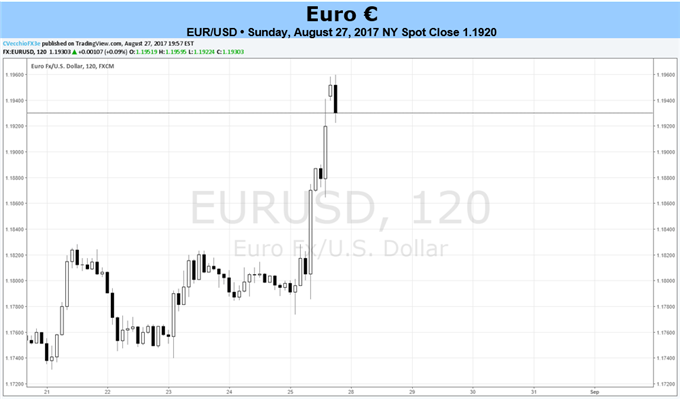 - Upcoming August Euro-Zone CPI data will show that price pressures have stabilized, after turning lower through the second quarter.

The Euro was a top performing currency last week after European Central Bank President Mario Draghi’s speech at the Federal Reserve’s Jackson Hole Economic Policy Symposium. The speech was widely expected to contain some measure of disparagement for the Euro’s excessive strength in recent months, but the lack of any dovish commentary surprised market participants.

The scope of the reaction in EUR/USD on Friday needs to be put in context: it was a Friday afternoon during the late-summer, a period known for its low participation. Illiquid conditions created an environment ripe for an outsized move. Regardless of what ECB President Draghi said on Friday, EUR/USD was prone for a sizeable move.

For the time being, it appears that the ECB will keep its powder dry and wait to take a stand against Euro strength at some point down the road. The reality in FX markets is that with inflation so low, the Euro’s strength may only be tolerated for so long. The ECB’s technical assumption for EUR/USD in 2017 is 1.0800; it closed last week at $1.1920.

Whether or not EUR/USD can advance beyond 1.2000 in the near-term seems to be contingent upon the upcoming August Euro-Zone Consumer Price Index release on Thursday: a disappointing release would give validity to the notion that the strong Euro is and will continue to get in the way of the ECB achieving its policy goals. Even if ECB President Draghi didn’t explicitly talk down the Euro last week, any evidence that the ECB remains a while away from achieving its inflation target will revive speculation that the ECB will refrain from making a significant stimulus withdrawal announcement at its September policy meeting.

Otherwise, traders should start to begin looking beyond the summer months and get ready for a more active fall. Once the US Labor Day weekend passes next week, liquidity will return and participation levels will rise in markets. German elections in September haven’t garnered much attention, but will likely draw focus as the vote draws closer. The US government may be staring at a shutdown if a debt deal doesn’t materialize by the end of the month. For now, the Euro has been granted some room to rally, but there are plenty of obstacles and catalysts for volatility just around the corner.