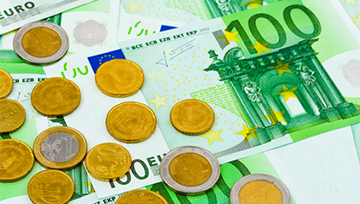 Euro Has to Get by July Inflation, Q2 Euro-Zone GDP if Rally is to Continue 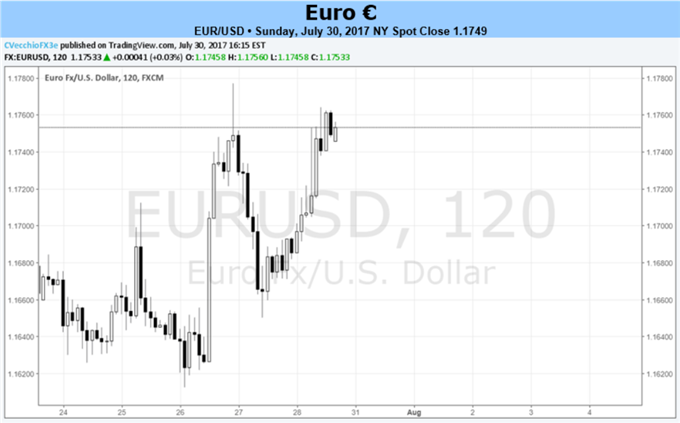 - Incoming July inflation data to show that price pressures barely over half of the ECB’s target; the stronger the Euro gets, the more of an issue it becomes for inflation.

- In the futures market, net-long Euro positions remain near their largest level since May 2011 – right when EUR/USD peaked just below 1.5000.

- Review our Q3’17 EUR/USD forecast as we finish the month of July.

The Euro was by no means the best performer last week, but it didn’t lag that far behind: the worst performing EUR-cross in the last full week of July was EUR/GBP, which closed lower by a mere -0.31%. With the Federal Reserve’s policy statement on Wednesday being interpreted as dovish by market participants, risk appetite was well-supported and nearly all major currencies were able to rally versus the US Dollar over the week. While EUR/USD closed at its highest level since January 2015 after a +0.75% rally, EUR/CHF surged by +3.11% to close at its highest level since the Swiss National Bank removed the floor in EUR/CHF in January 2015.

Generally speaking, it appears that the factors underlying general Euro strength the past few months are also underlying the sustained jump in risk appetite: political risk has dissipated quickly from Europe; the European Central Bank is looking like it’s getting closer to announcing the next stage of tapering of its QE program; and the debt crisis doesn’t look like it’s going to reemerge anytime soon, with French and Spanish growth picking up and Greece returning to international bond markets.

Yet while we’ll see plenty of evidence of the ‘good’ that’s going on in Europe right now in the coming days – notably in the form of the preliminary Q2’17 Euro-Zone GDP report on Tuesday – we’ll also get some data that should give the ECB some cause for concern. At the start of the week, on Monday, the preliminary July Euro-Zone Consumer Price Index is set to be released. Low inflation remains a problem, according to consensus estimates, with the headline due in at +1.3% and the core in at +1.1% (y/y), unchanged from June.

The reality in FX markets is that with inflation so low, the Euro’s strength may only be tolerated for so long. The ECB’s technical assumption for EUR/USD in 2017 is 1.0800; it closed last week just below $1.1750.

A few more months of a stronger Euro, weaker energy prices, and persistent underperformance in inflation readings, and it’s easy to envision the ECB taking issue with the market’s hawkish interpretation of the policy adjustments being made. For now, it seems officials are suggesting that a step down in the QE program could come as soon as September.

If the economic calendar for the Euro this week turns out mediocre, it could give traders reason to pause with their aggressive bullish bets. Over the last few weeks, the mood has quietly been turning less bright: the Euro-Zone Citi Economic Surprise Index is down to +16.1 from +30.3 over the past four-weeks; and 5-year, 5-year inflation swap forwards, a market measure of medium-term inflation expectations, have fallen from 1.579% on June 30 to 1.557% on July 28. It would seem that the US Dollar’s ongoing soft stretch is covering up for some fundamental deterioration on the Euro’s side of things.

Market positioning would dictate that any weakness in the Euro in the near-term would be of the profit taking variety. Certainly, the Euro long trade is getting crowded (relatively speaking). According to the CFTC’s latest COT report, there were 90.8K net-long contracts held by speculators in the futures market for the week ended July 25, near thehighest level since the week ended May 3, 2011 (when EUR/USD peaked just below 1.5000). While positioning could build further, it’s important to recognize that the Euro long trade is saturated and it may be time for a breather soon.