Euro Bulls Get Room to Run: But Will They Show Up to Drive the Trend? 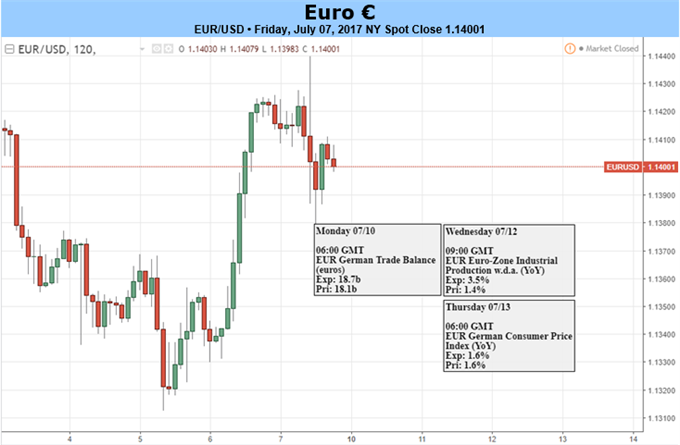 DailyFX Q3 Forecasts have just been released, and are now available as part of our trading guides. If you’re looking for something more interactive in nature, please check out our DailyFX Live Webinar Calendar.

The European taper tantrum has continued into another week, and Euro interest rate forwards are now pricing in two ten-basis point hikes going out to the end of next year; specifically around ECB meetings in July and December of 2018. This is a stark contrast to just a month ago, when there were no hikes expected over this same period. As we discussed last week , this theme of higher rate expectations kicked off around a speech from ECB President Mario Draghi, when the head of the bank said that ‘deflationary forces have been replaced with reflationary forces’, and this came after the comment: ‘The threat of deflation is gone and reflationary forces are at play.’ So, Mr. Draghi’s reiteration around this topic has served to drive rate expectations higher as the continued strength in European inflation is forcing a hawkish turn within the ECB.

Data for this past week out of Europe was relatively light, with only a handful of medium-importance announcements. On Monday, Euro-Zone Unemployment printed in-line at 9.3%, and then EZ retail sales came-in above expectations on Wednesday, printing at 2.6% versus the expectation of 2.3. A mixed bag of data came out of Germany on Thursday and Friday, as factory orders disappointed while industrial production numbers printed with a strong beat. The fundamental driver that appeared to garner the most attention this week and which led to a strong showing in the Euro on Thursday was the ECB minutes from the June rate decision. This meeting saw the bank hold rates flat while Mr. Draghi attempted to talk down the Euro, after which buyers showed-up to support prices. But in the meeting minutes, it became clear that there is a growing chorus within the bank looking for tighter policy options as inflation continues to remain strong.

Next week is another light data week with only three European prints of medium-importance, and there are no Mario Draghi speeches on the calendar. While this certainly doesn’t preclude unplanned comments, or leaks or ‘anonymous sources’ as we saw the day after Draghi’s speech in Sintra, this light data calendar can be an opportune time to grade bullish continuation prospects for the Euro in the weeks and months ahead. But key here will likely be the matter of pair selection for those bullish Euro plays. While EUR/USD is the obvious flashpoint that generally garners the most attention, traders may be better served directing Euro-strength plays towards the Japanese Yen.

The current issue of pressing long-Euro plays against the Dollar is largely technical in nature. Prices in EUR/USD have run-up to test a trend-line that’s been active for close to two years. Last week’s high in the pair printed just shy of that trend-line, giving the appearance that bullish motivation began to wane as this level came into play. On the other side of the Euro, the U.S. Dollar has been incredibly weak, and as we oscillate around nine-month lows, traders may want to look elsewhere for a potentially weak currency to pair up with that stronger Euro. 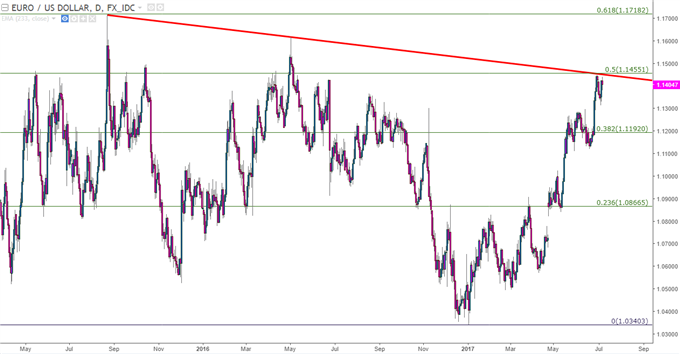 In EUR/JPY, however, traders can attempt to proactively coalesce recent themes, as one of the few major currencies that’s been weaker than the U.S. Dollar over the past few weeks has been the Japanese Yen. Again, this is likely resultant of the global bond rout that’s taken place as the European taper tantrum has heated up, and given the fact that the Bank of Japan will likely be one of the last major Central Banks to investigate stimulus exit. EUR/JPY is currently trading at 17-month highs after this morning’s burst-higher drove above the psychological ¥130.00 level; and re-tests of support around ¥128.50 could be particularly interesting for bullish continuation approaches.