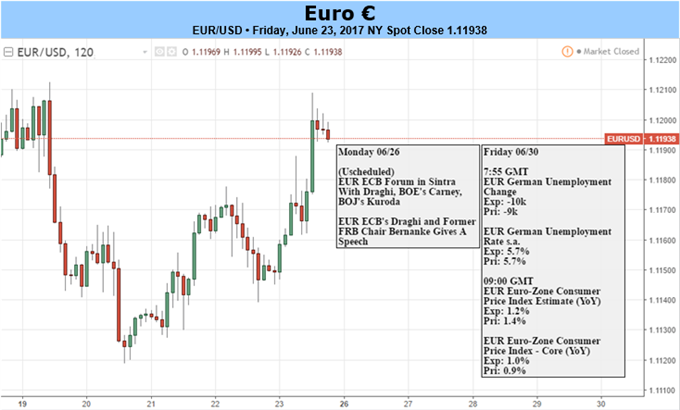 Looking for help with Euro trade ideas? Sign up for a Q&A webinar to discuss the outlook live!

The Euro paused to consolidate last week having faced heavy selling pressure though the first half of June, helped by a lull in heavy-hitting news flow. A barebones data docket leaves the single currency without obvious catalysts for much of next week but Friday’s inflation report may yet produce fireworks.

Baseline forecasts see the year-on-year inflation rate falling to 1.2 percent in June, the lowest yet this year. With last year’s recovery in crude oil prices now seemingly filtering out of CPI calculations, a downtick seems like a reasonable expectation. However, things may be more dire than expected.

News-flow out of the currency bloc has increasingly disappointed relative to analysts’ projections over the past two months. Price growth figures have borne out this general trend, although there have not been enough of them to truly make sweeping assumptions.

On balance, this hints that economists’ models are overstating the economy’s vigor as well as pricing power recovery potential, opening the door for a downside surprise. That is unlikely to play well with investors cautiously betting that the ECB will soon scale down the size of its monthly asset purchases again.

A soft print may go a long way toward boosting the credibility of the central bank’s decidedly dovish posture on the display in the immediate aftermath of its latest policy meeting. Indeed, President Mario Draghi may reiterate as much at the annual ECB Forum on Monday. All this bodes ill for the common unit.