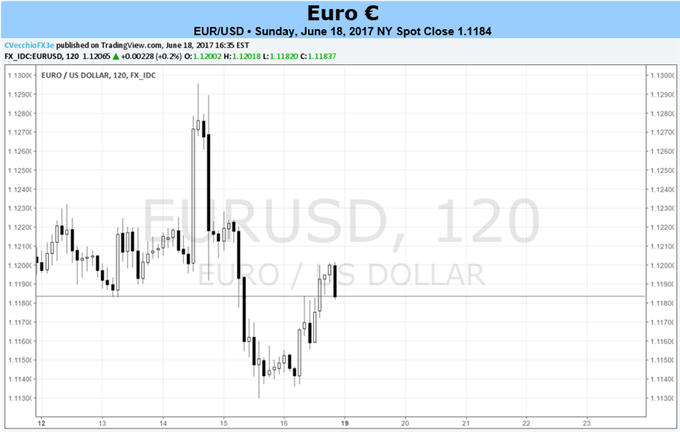 Euro Treading Water as Bullish Catalysts Have Been Sorely Lacking

- After all was said and done last week, EUR/USD gained a mere +0.03%, and hasn’t made much movement over the past month.

- As energy prices remain under pressure, Euro-Zone inflation expectations have tumbled to 2017 lows.

The Euro finished last week in the middle of the pack, lagging behind the resurgent commodity currency bloc in what appears to be driven by profit taking rather than a material improvement in the commodity space. Outside of the commodity currencies, the Euro was rather stagnant, with EUR/USD gaining a mere +0.03% and EUR/JPY – the best performing EUR-cross – gaining +0.53%. The Euro isn’t terribly positioned, rather, it’s missing a spark to continue its rally.

The Euro’s lack of bullish fundamental drivers can be examined in a number of ways. The Citi Economic Surprise Index for the Euro-Zone closed last week at 30.4, its lowest level of the year. This reading means that economic data releases have been producing fewer and fewer upside surprises – momentum is waning. With energy prices falling back over the past few weeks (Brent Oil has fallen from $53.61/brl on May 19 to $47.36/brl on June 16), inflation expectations have taken a step back as well, to 2017 lows, now at 1.530%.

The corresponding decline of inflation expectations may be holding back the Euro in a way directly related to the European Central Bank. No doubt, the ECB and President Mario Draghi have taken careful, measured steps at recent policy meetings in order to signal that their accommodative policy will be lingering around through at least 2018. The market’s collective response may be part of the reason the Q2’17 Euro rally has faded: the odds of a rate hike by the end of 2017 have dipped to 10.7% on June 16 from 34.1% on May 19 (and from 55.1% on March 21).

There are thus two antidotes the Euro could use to end its lull in the near-term: higher oil prices translating into higher inflation expectations; or a period in which economic data turns higher again. The latter would be better than the former for the Euro.

Unfortunately, in the early part of the week, there’s nothing of too great of interest on the economic calendar. Thursday brings the first event rated ‘medium’ or ‘high’ of the week, the preliminary June Euro-Zone Consumer Confidence index. On Friday, data releases increase in volume with the final Q1’17 French GDP reading (which shouldn’t move markets) and a smattering of preliminary June PMI releases for France, Germany, and the broader Euro-Zone (which have the best chance of any data released all week to spark volatility).

While the French national assembly elections over the weekend will continue to point to the deflating political risk premium for the Euro-Zone, the Euro doesn’t seem to have much good news going for it at the moment. That’s not to say that the Euro is in a bad position; rather, it has just been sorely lacking bullish fundamental drivers.

See how our Q2’17 Euro forecast is holding up so far - check out the DailyFX Trading Guides.