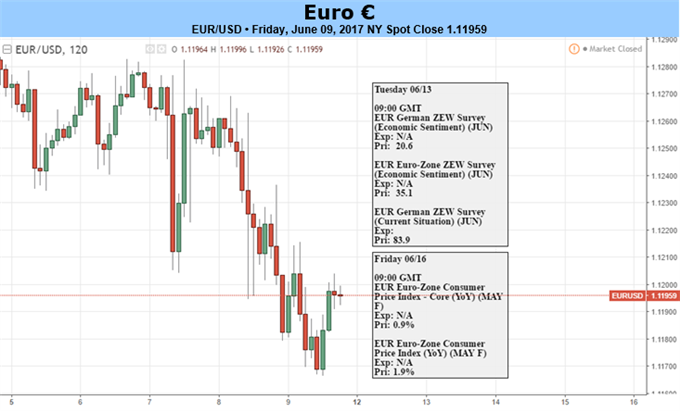 ECB Cuts Inflation Forecasts, but is it Enough to Quell the Euro’s Advance?

The Euro was lower on the week against most major currencies, falling by -.7% against both the U.S Dollar and Japanese Yen along with a -1.6% decline against the Australian Dollar. The Euro ended the week stronger versus the British Pound, as yet another shocking election result in the U.K. elicited a quick dose of Sterling weakness, with the single currency gaining .4% against the British Pound. Perhaps the most interesting aspect of this week’s price action in the Euro wasn’t what happened, but what didn’t happen: The European Central Bank took another dovish tilt towards forward outlook, cutting inflation forecasts going out to 2019, and the Euro did not break its streak of recent strength against most major currencies on Daily charts. Bullish trends remain in EUR/USD and EUR/JPY as each pair’s pullback following yesterday’s ECB meeting has, at least so far, been met with some element of buyer support around previous inflection levels.

As we discussed last week, the ECB’s inflation forecasts were very much a focal point around this rate decision. With little expectation for any actual moves on rates, markets have been attempting to read the tea leaves in the effort of getting in front of the ECB’s exit from their outsized stimulus program; and the ECB’s expectations for future inflationary forces would likely govern just how aggressive the bank might be with a continuation or reduction of stimulus. The ECB cut inflation forecasts for the next three years: Dropping 2017 expectations to 1.5% from a prior expectation of 1.7%, 2018 was moved lower to 1.3% from a prior 1.6%, and 2019 was reduced to 1.6% from a prior 1.7%.

This very much echoes recent commentary from Mario Draghi, remaining dovish in light of improvements within the European economy. In March of this year, we discussed how the ECB would likely remain dovish in light of upcoming political risks, even with the ‘green shoots’ of economic growth having already started to show. But as those political risks abated with rather market-friendly outcomes, and as growth and inflation have continued to print in a positive direction, expectations for the ECB to step away from stimulus have continued to increase. Many prominent voices within Europe, particularly from Germany, have openly questioned the continued easy money policies from the ECB. German Chancellor Angela Merkel has even went so far as to say that the Euro was ‘too weak’.

This serves to highlight the divergence currently being seen around expectations for European economic policy. While the ECB and Mario Draghi continue to transmit a rather dovish tone with a fairly passive outlook towards inflation, markets are seemingly responding to the growing chorus of calls within the bloc to begin exploring ‘less-loose’ policy options. Euro trends remain buoyant against the backdrop of the U.S. Dollar and Japanese Yen, and until this changes, traders should look to address each market with some form of a bullish bias.

The big items on the calendar for next week are not directly Euro-related, as we’re hearing from Central Banks in the U.S., the U.K. and Japan. Each of these rate decision can carry macro-overtones which can certainly impact Euro spot rates. The one high-impact item on the calendar for next week out of Europe is the German ZEW survey on Tuesday morning, and while this could potentially be market moving, this likely won’t be reversing any trends given just how strong German data has been of recent. On Wednesday, we get German inflation and Euro-Zone employment numbers; each of which can create a dose of near-term volatility. Thursday brings trade balance numbers, and the week closes with the Friday release of Euro-Zone inflation figures for the month of May, and this will probably be the most interesting piece of European data that markets get to work with next week as inflation very much remains the ‘push point’ for near-term Euro-trends, even in light of the dovish backdrop of this week’s ECB meeting.