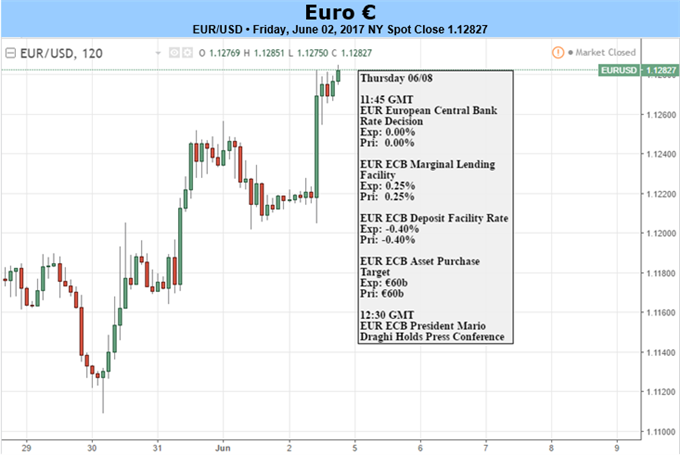 The European Central Bank meets for a rate decision to be announced this upcoming Thursday. As has become usual around these announcements, there is little expectation for any actual moves on rates: But the bigger issue at bay is whether or not the ECB is encouraged enough by the continued growth in the European economy to begin thinking about exiting from the massive stimulus outlays of the past few years, and this could begin to show up in the ECB’s updated economic projections which will likely be the primary focal point of next week’s rate decision.

As we wrote last week, there’s a pronounced case of divergence between what ECB President Mario Draghi has been saying and price action in Euro-markets. The Euro has put in a steady stream of strength throughout 2017 against most major currencies, and throughout this period, Draghi has appeared rather unmoved by stronger growth, rising inflation and improvement in the labor force. With economies in Northern Europe at more advanced stages of recovery, there are legitimate fears of ‘overheating’ as asset prices get even-more elevated while labor markets remain tight. Meanwhile, much of Southern Europe is at an earlier stage of recovery, and with unemployment remaining around or above 10%, they’d likely want a more passive approach from the European Central Bank to assure that this recent trend of growth remains.

This has created bifurcation around the topic of stimulus within Europe and even within the ECB. Just yesterday we heard from Sabine Lautenschlager who sits on the ECB’s executive board. Ms. Lautenschlager remarked that ‘all ingredients for an appropriate increase in prices are present, ’ going on to remark on the prospect of exiting stimulus, ‘hesitating for too long only creates problems.’ Yesterday also brought comments from Jans Weidman, the head of the Bundesbank, who directly said that the ECB is starting to debate whether to reflect the improving economic data in Europe in its policy guidance. And even German Chancellor Angela Merkel opined around the matter recently, when she said last week that the value of the Euro is ‘too weak’.

Meanwhile – in comments in front of European Parliament earlier this week, Mario Draghi struck a familiarly dovish tone as he said that it was far too early to expect a change in monetary policy because officials are ‘firmly convinced’ that the economy needs further support. And this is on the heels of comments earlier in the month when Mr. Draghi faced-down Dutch Parliament that posed a stern line of questioning around QE; with which the ECB President responded that ‘underlying inflation pressures continue to remain subdued and have yet to show a convincing upward trend.’

So, if we’re reading the headlines, if we’re watching what these very important voices in European politics and economics are saying, there is a lot of noise with very little clarity. As I learned to say in Texas, the matter is ‘as clear as mud.’ The data and price action in the Euro, however, have both reflected strength, and this is likely due to markets attempting to get in front of an ECB stimulus exit, much as the introduction of stimulus was front-run with most of the Euro’s bearish QE-move coming in before QE ever actually started in March of 2015.

On the topic of that improving data: We actually saw inflation slow a bit with Eurozone inflation for May coming-in at an annualized 1.4% versus a prior 1.9% in April, and core inflation came-in at .9% versus the prior print of 1.2%. This may have bought Mr. Draghi a bit of time on the topic of stimulus exit, as this is further proof that we’re not quite at the ‘overheating’ stage for the entirety of the European economy; but the bigger question will be just how optimistic the ECB appears to be in their updated economic projections, and this will likely be the primary driver for the Euro in the week ahead. It seems a near-certainty that the ECB will upgrade their economic projections given this continued growth, the obfuscation is just how much they might upgrade those projections and how quickly they’ll forecast a return for a bloc-wide return to 2% inflation.

The forecast for the Euro will be set as bullish for the week ahead.