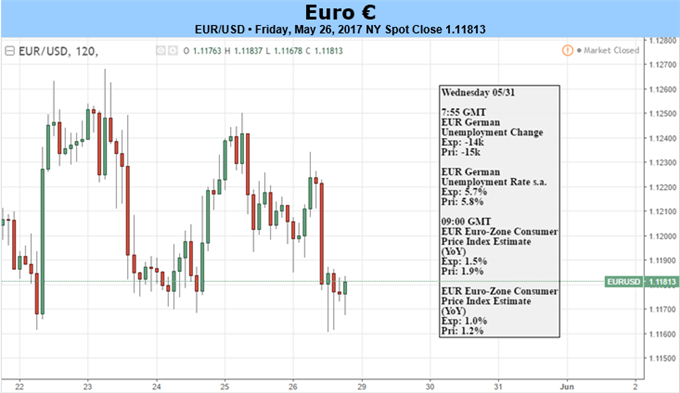 In a week that was relatively light of high-impact European data, EUR/USD perched up to yet another fresh six-month high. This furthered the move that started from the lows on April 10th when the pair found support around 1.0600; and since then we’ve had two rounds of French elections along with an ECB meeting, and the net result of that outlay has been a continued run of strength that’s now comprised six big figures in EUR/USD over the span of seven weeks as investors continue to prod the pair-higher.

The elephant in the room for the Euro at the moment is the prospect of QE taper. Various members from the European Central Bank and Mario Draghi himself have directly spoken against this, on multiple occasions, yet markets are apparently continuing to try to get in-front of any inevitable announcement of QE coming to an end before rate hikes move on the table. In March, we wrote that this was an issue that the ECB would likely have to contend with as the ‘green shoots’ of recovery continued to show. At the time, we had some very large political hurdles for that theme to pass with both Dutch and French elections in the immediate future; but as both of those have been resolved in a rather market-friendly fashion, and as European data has continued to show signs of improvement, investors have continued to bid the Euro-higher under the presumption that the ECB would not likely move-forward with another yet another round of QE as the European economy shows signs of promise.

This would be the first step away from the ‘ultra-loose’ monetary policy of the European Central Bank, with the next logical step being a tightening of policy with higher rates. At the most recent European Central Bank meeting, ECB President Mario Draghi spoke directly to this subject when he said that the bank hadn’t even discussed the prospect of exiting from their current stimulus outlay. Mr. Draghi went on to cite a continued lag in inflation, specifically on the topic of wage growth, as a deterrent from looking at tighter policy options in the near-term.

Next week brings European inflation into the spotlight: We get German inflation on Tuesday morning, just after a long holiday weekend in the United States, and on Wednesday morning we get the release of Euro-Zone inflation figures for the month of May. Given the fact that the Euro has continued to trend-higher despite Mario Draghi’s numerous comments against the prospect of QE taper, fully expect the Euro currency to trade with a direct relationship to these data points, with beats producing additional gains while misses bring on pullbacks and retracements. The bigger question is whether those pullbacks or retracements might turn into something larger after EUR/USD has tacked on over 600 pips in less than two months; and given the extremely weak state of the U.S. Dollar combined with the fact that many are looking for a rate hike from the Federal Reserve in the middle of June, we could be looking at a recipe of a deeper retracement before the longer-term bullish move might be ready for resumption.

The forecast for next week will be set to neutral on the Euro as we wait for additional signs of growth/inflation to catch up with the technical trends that have already begun to show on the charts.