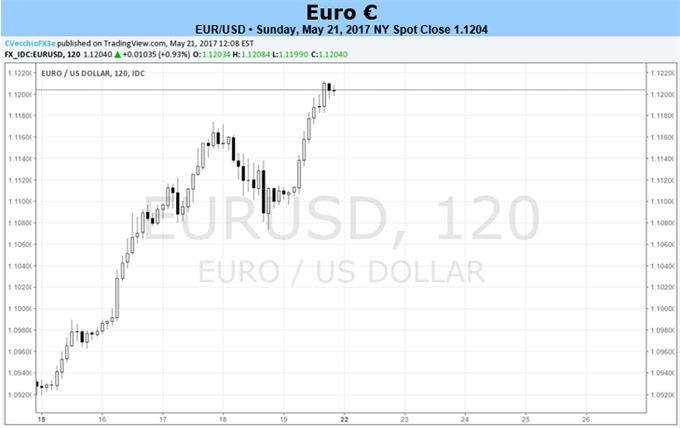 - Continued rise in US political risk has increased Euro’s appeal versus US Dollar, particularly as timeline for US fiscal stimulus appears to have been pushed back significantly.

- The retail crowd still isn’t buying into the EUR/USD rally – which means it may have more room to run yet.

Now that the bulk of political risk for the Euro-Zone is in the rearview mirror, and economic data continues to improve, it appears that the Euro is benefiting from both deteriorating fundamentals in the United States as well as a slowly increasing likelihood that the European Central Bank will pull further back from its extraordinary easing measures. Market-implied odds of a rate hike by the end of the year are up to 34%, according to overnight index swaps.

But these odds warrant a bit of dissection, given the current context of policy. A hike isn’t likely as long as the ECB continues to buy bonds under its asset purchase program, so markets are instead starting to discount a change in the language the ECB uses to describe the path of its interest rates, as well as another step down in its bond buying program.

Data out of the Euro-Zone has been strong, with the Euro-Zone Citi Economic Surprise Index at +59.5 on May 19 versus +49.3 a month ago. Likewise, medium-term inflation expectations have barely moved over the past month, with the 5-year, 5-year inflation swap forwards closing last week at 1.597% from 1.610% on April 21.

The economic docket is rather light, as the preliminary May Euro-Zone PMIs are the only items of true interest this week (the final Q1’17 German GDP reading shouldn’t generate much price action). The PMIs due are expected to imply continued modest growth in the region, with the composite reading expected to nudge slightly lower from 56.8 in April to 56.7 in May. Yet given that the prime driver of Euro strength appears to be due to mostly exogenous forces, it’s unlikely that data due over the coming days materially alters the market’s opinion of the Euro itself.

See how our Q2’17 Euro forecast is holding up so far - check out the DailyFX Trading Guides.