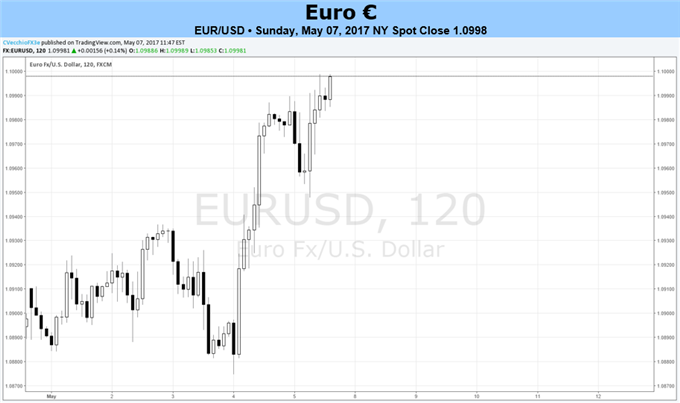 - With the final round of French election results coming out before markets open up on Sunday, expect another gap in the EUR-crosses (results due out at 14:00 EDT; FX markets open at 17:00 EDT).

With the second and final round of the French presidential elections due out Sunday, May 7, FX markets have already started to price in a victory by pro-EU centrist Emmanuel Macron over anti-EU populist Marine Le Pen. At the tail end of last week, EUR-crosses surged higher, with EUR/USD touching 1.1000 since November 9, 2016 – the day of the US presidential election.

Ahead of the results ahead of the FX market open on Sunday, Macron has consistently polled ahead of Le Pen by around 20 points; a Macron landslide is already discounted. FX markets are not remotely pricing in a chance of a Le Pen victory, as implied measures of volatility for the Euro had collapsed and stayed quite low in the wake of the April 23 first round results.

Accordingly, while a gap open is expected when FX markets open up for the next week, gap risk is asymmetrical: a Macron win should generate a small open higher in EUR-crosses; a Le Pen win would lead to a major gap open lower in EUR-crosses.

Putting the French election results in context of recent ECB policy statements, it would seem that the Euro has a constructive path forward and should be bought on dips. Removal of political tail risk from the Euro-Zone should give the ECB greater leeway to move away from its aggressive monetary easing policies, perhaps as soon as the June meeting (when the next set of staff economic projections (SEPs) come out).

By midweek, traders should have turned their attention from the French elections to the handful of speeches and meetings that will generate headline risk for FX markets. EU ambassadors are meeting on Wednesday to discuss the bloc’s approach to handling the Brexit negotiations. Also on Wednesday, ECB President Draghi will give a speech at the Dutch parliament. From Thursday to Saturday, G7 finance ministers and central bank governors will meet in Italy. While the calendar is absent of much meaningful data, traders must be sure to mind the newswire.