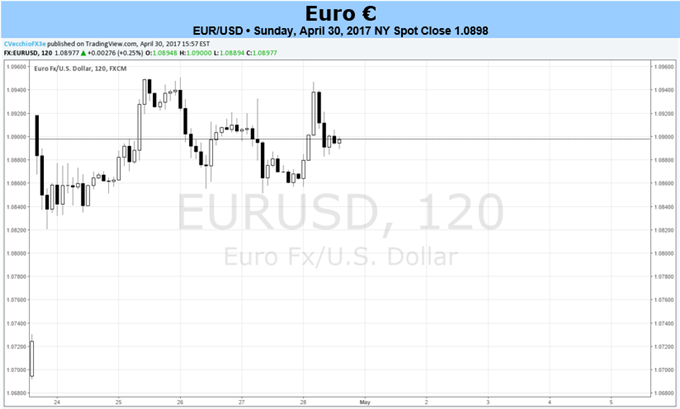 - The Euro was able to hold onto its gains from the first round of the French election results, even as the ECB was conspicuously neutral on Thursday.

- Upcoming Q1’17 Euro-Zone GDP data to confirm that region has seen broadly improved growth prospects through the early part of the year..

The Euro has proven resilient in the wake of the first round of the French presidential elections, holding onto the majority of its gains across the board as traders digested last Sunday’s vote tallies. With centrist Emmanuel Macron and far-right populist Marine Le Pen heading towards a runoff on May 7, it’s very likely that the Euro will prove to retain its sense of stability that transpired after last week’s gap open higher.

Ahead of the May 7 election, the same polls that were as accurate as accurate could be for the first round of the French elections show that Macron is favored to beat Le Pen handily in a week’s time. Markets have more or less priced in this outcome as well by this point in time, with various measures of short-term volatility (one- and two-week, as well as one-month) collapsing significantly after the April 23 first round vote. Historically, rising volatility has proven negative for the Euro; should it stay retrenched, then the environment would suggest market participants have pushed the premise of an existential threat to the Euro (i.e, a ‘Frexit’) out of their minds.

Absent preparations for the final round of voting in France, the Euro has been further stabilized by a lack of movement along the policy front by the European Central Bank. To no one’s surprise, the April meeting provided little of interest from President Mario Draghi and the Governing Council, which wasn’t expected to any degree given that it was a meeting without new staff economic projections. Like so many other major central banks, in an effort to become more transparent, the ECB has become predictable: no policy changes will be announced unless there are new forecasts in hand to justify the change in approach.

That said, the ECB had another reason to sit on its hands last week and uphold the status quo (aside from refusing to wade into the French political scene): it wanted to avoid a market reaction like what resulted in the wake of the March policy meeting. The Euro, alongside rising sovereign debt yields, moved broadly higher after the March meeting as market participants took the tone of President Draghi’s press conference as a sign the ECB was moving towards the exit from its extraordinary easing measures – a misinterpretation, apparently, after a concerted ECB pushback at the end of last month.

Now, with the ECB holding a steady hand and the final round of the French presidential elections looming, the Euro should continue along its rangebound path that emerged in the final week of April. There will be bursts of volatility thanks to data and events on the economic calendar, but nothing that should destabilize the market. If anything, upcoming PMI readings and the preliminary Q1’17 Euro-Zone GDP reading will show that growth conditions in the region have been improving steadily through the early part of the year. If by this time next week Macron is the next president of France, the Euro very-well have seen its biggest risk for 2017 fade quickly into the rearview mirrow.