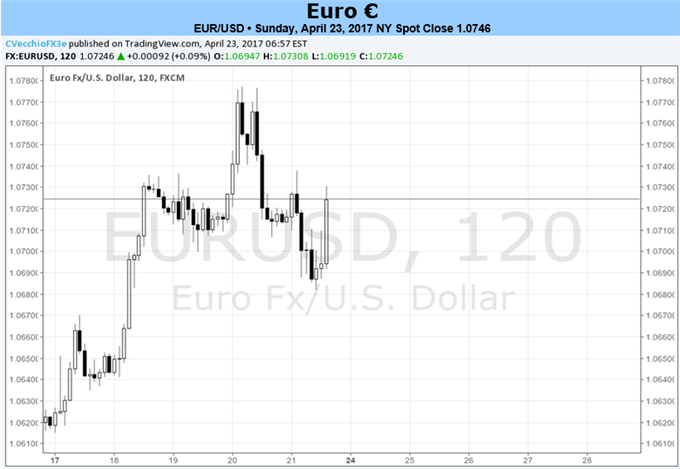 - With French election results coming out before markets open up on Sunday, expect a sizeable gap in the EUR-crosses (results due out at 14:00 EDT; FX markets open at 17:00 EDT).

- The ECB policy meeting on Thursday, without new staff economic projections (SEPs), is pretty much an afterthought.

With the first round of the French presidential elections due out Sunday, April 23, traders have remained noncommittal about pushing various FX pairs in any concerted direction. EUR-crosses have done little but remained rangebound for the past several days, and overall, pairs like EUR/GBP and EUR/USD have made few significant moves during the entirety of 2017.

Ahead of the vote, the overall frontrunner, Emmanuel Macron – who, according to French polling institute Ifop has the best chance to beat right-wing populist Marine Le Pen in a second round runoff – has seen his odds of winning increase after a brief dip the past two weeks. According to Oddschecker, the aggregate probability of a Macron victory has risen back to 58% from 53% last Friday.

With first round polling figures showing that the top four candidates are within four percentage points of one another (Le Pen, Macron, Fillon, and Melenchon), it is very possible that Macron doesn’t make it to the second round – which would be a veritable reason for concern for the Euro.

Traders should brace themselves for a gap open at the market on Sunday. The results should begin to trickle out around 20:00 CEST in Paris, or roughly 14:00 EDT in New York. By the time markets open in New York three hours later, any late results should be declared already and markets will know who is advancing in to the second round of voting on May 7.

The best case scenario for the Euro? A Macron-Fillon runoff, in which case EUR/USD could easily trade through 1.0900. The worst case scenario for the Euro? A Le Pen-Melenchon runoff, which could easily see EUR/USD make a run down towards 1.0500. Overall, if Emmanuel Macron makes it into the second round of voting, as the candidate with the best odds to beat Marine Le Pen, then the Euro could see a relief rally.

Although the European Central Bank is meeting on Thursday this week, the policy meeting is as close to an afterthought as possible. There won’t be any new economic projections (SEPs) at the coming meeting, meaning the odds of an alteration of policy are exceptionally low to begin with. Factoring in the French elections, and it all but guarantees ECB President Mario Draghi and the Governing Council will use the policy meeting as a stopgap until their next round of SEPs come out in June.