Euro on Edge During Holiday-Shortened Week Ahead of French Elections 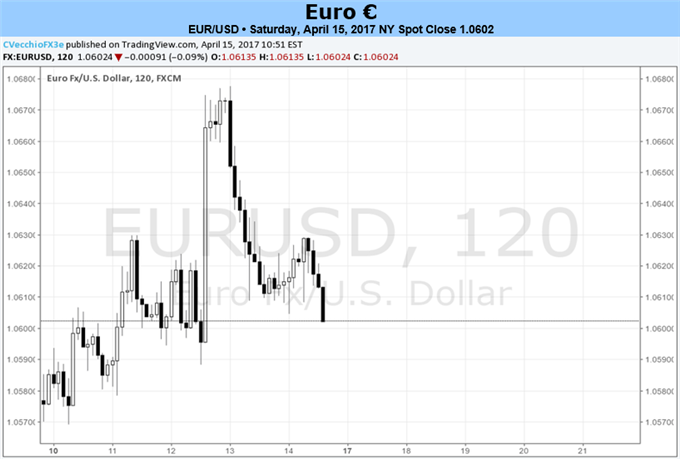 - French-German yield spreads widening back out, reflecting the market’s uncertainty over the outcome over the French election.

- The retail crowd remains net-long EUR/USD, which as a contrarian indicator means losses could persist.

The Euro lost ground against every major currency (save the US Dollar) last week, as a quiet economic calendar during a holiday-shortened week gave plenty of room for speculation around the French elections to dictate the market’s mood.

With the first round of the French presidential elections fast approaching next Sunday, April 23, traders will want to watch developments in the polls. The overall frontrunner, Emmanuel Macron – who, according to French polling institute Ifop has the best chance to beat right-wing populist Marine Le Pen in a second round runoff – has continued to slip. According to Oddschecker, the aggregate probability of a Macron victory has fallen to 52.9% from 66.7% on March 31. With first round polling figures showing that the top four candidates are within four percentage points of one another (Le Pen, Macron, Fillon, and Melenchon), it is very possible that Macro doesn’t make it to the second round – which would be a veritable reason for concern for the Euro.

Certainly, market participants are starting to prepare for the worst, with one-month implied volatility for EUR/USD having increased from 7.25% to 13% over the past five weeks, and it now sits at its highest level since the Brexit vote in June 2016. The easiest place to spot the growing concern over the French election in the market is in French OAT yields, particularly how they’ve traded relative to German Bunds over the past month. The 10-year French-German yield spread closed this past week at 73.8-bps, up from 56.9-bps two months ago.

Overall, fundamental drivers for the Euro appear mixed, if not slightly deteriorating. Euro-Zone economic data continues to outperform expectations on a less frequent basis, as measured by the Citi Economic Surprise Index. The Euro-Zone CESI eased to +38.9 at the end of the week, down from +48.1 a month ago. The 5-year, 5-year inflation swap forwards, a measure of medium-term inflation (and one of ECB President Draghi’s preferred gauges) closed last week at 1.578%, lower than the 1.681% reading a month ago.

Much like last week, the forthcoming week very little by way of data that could materially impact the market’s current pricing of the Euro (there are zero ‘high’ rated events on the DailyFX Economic Calendar). If there are data traders may be inclined to keep an eye out for, however, Wednesday’s release of the final March Euro-Zone Consumer Price Index and Friday’s release of the preliminary April Euro-Zone PMI readings (manufacturing, services, and composite) have the highest chances of generating volatility.