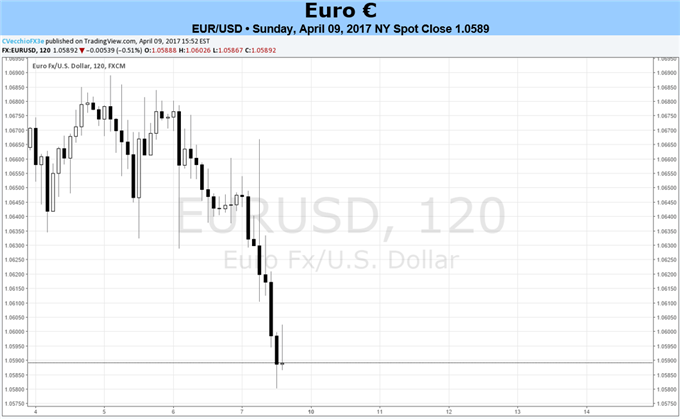 - US-German 2-year yield spread now at widest level since March 16, which has pushed EUR/USD down below its March 16 lows.

- French election concerns may be creeping back into the picture as Emmanuel Macron’s frontrunner status begins to slip away.

- The retail crowd is now net-long EUR/USD, which as a contrarian indicator means losses could persist.

The Euro lost ground against the Japanese Yen and the US Dollar last week, but was a winner everywhere else against the major currencies. The domestic economic data due over the coming days offers little by way of information that could materially impact the market’s current pricing of the Euro (there is one ‘high’ rated events and only four ‘medium’ rated events – see the DailyFX Economic Calendar for more details).

Generally, however, fundamental drivers for the Euro appear mixed – underlying the directionless drift of the broader Euro complex. Euro-Zone economic data has started to outperform expectations on a less frequent basis, as measured by the Citi Economic Surprise Index. The Euro-Zone CESI eased to +41.1 at the end of the week, down from +54.1 9 a week earlier, and down from +57.9 on March 10. The 5-year, 5-year inflation swap forwards, a measure of medium-term inflation (and one of ECB President Draghi’s preferred gauges) closed last week at 1.605%, lower than the 1.719% reading a month ago.

Elsewhere, the relationship between yields and EUR/USD appears to be returning as a driver again. Recall that in the first week of November 2016, when EUR/USD traded near 1.1140, the German-US 2-year yield spread was roughly -145-bps. At the end of last week, with EUR/USD trading near 1.0589, the spread was -210-bps. The 20-day correlation between EUR/USD and the German-US 2-year yield spread is currently +0.60. The significance of relationship between EUR/USD and yieldsis increasing again: the 20-day correlation was +0.49 two weeks ago.

Finally, traders will want to watch developments around the French presidential election, as the first round is approaching fast on April 23. The frontrunner, Emmanuel Macron – who, according to French polling institute Ifop has the best chance to beat right-wing populist Marine Le Pen in a second round runoff – is starting to slip. According to Oddschecker, the aggregate probability of a Macron victory has fallen from 66.7% a week ago to 59.7% at the close on Friday. A further retrenchment of Macron’s victory odds will only increase uncertainty around the Euro: one-month implied volatility for EUR/USD has jumped from 7.25% to 12.50% over the past month, the highest since the Brexit vote in June 2016.