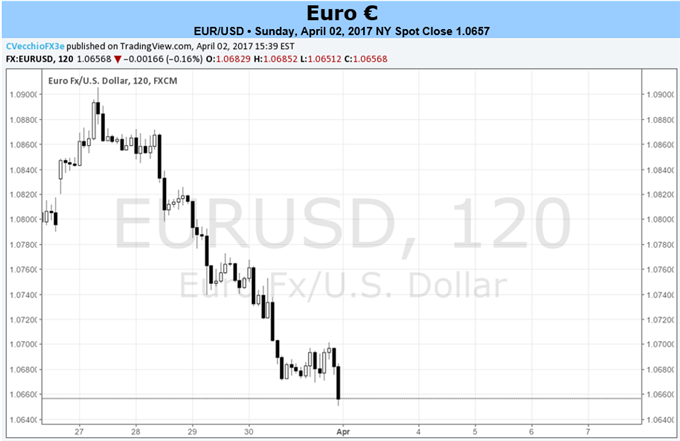 ECB Pushes Back Against Euro Strength; French Elections Around the Corner

- The ECB floated a story through Reuters to express their discontent over the market’s interpretation of their March policy meeting, saying that loose policy is not going anywhere anytime soon.

- French elections are keeping a lid on a significant move higher for the Euro, but markets are getting more confident that the Euroskeptic candidate Marine Le Pen will lose.

- The retail crowd is now net-short EUR/USD, a dramatic swing in positioning from the start of last week.

The Euro struggled mightily last week, losing ground against all of the major currencies covered by DailyFX Research. The catalyst for the decline wasn’t necessarily on the radar, as a report released by Reuters featuring ‘unnamed sources’ at the European Central Bank proved to be the major driver for price action on the week. Even the official start of Brexit on Wednesday couldn’t lift EUR/GBP, which was the best performing pair, closing down by -2.00% in the last week of March.

The Reuters report suggested that the ECB hasn’t been thrilled with the market reaction to their March policy meeting, which we (among others) characterized as “dovish with a hawkish twist.” Apparently, the interpretation that there was a hawkish twist wasn’t desired by ECB officials. Such an interpretation led to rates markets pricing in a 50% chance that the ECB would hike rates by December, according to overnight index swaps.

It wasn’t that the rally in the Euro and sovereign bond yields has gone too far; the Reuters report suggested that officials were concerned with further rises in yields, particularly in the peripheral countries. "We wanted to communicate reduced tail risk but the market took it as a step to the exit," one of the sources said to Reuters. "The message was way overinterpreted."

Giving credence to the pushback by the ECB were the inflation data released over the course of the week, culminating in the Euro-Zone CPI for March falling back below +2% on Friday. "Inflation has peaked for now and the oil price is down 10 percent so we are far from having to worry about too much inflation," one of the sources quoted in the Reuters report said. ECB officials are doing what they can to make clear that a rate hike is not coming in 2017, particularly as bond buying continues (now scheduled for €60 billion per month through the end of the year).

While the ECB may have its way in the short-term now that sovereign bond yields have declined and the Euro has slid back, there is still a major catalyst coming up in the next few weeks that could send the Euro dramatically higher: Marine Le Pen’s defeat in the French presidential elections. The April 23 election is not expected to yield a candidate achieving greater than 50% of the vote, so a second round run-off seems highly likely on May 7. Even then, it appears that Emmanuel Macron is poised to be the next president of France, with polls giving him around a +20-point edge (typically in the 60-40 neighborhood). Betting markets, according to Oddschecker’s aggregation, give Macron a 67% chance of winning the French presidency (up from 49% a month ago) while Le Pen only has a 24% chance of victory (down from 31% a month ago).

These dueling factors – the ECB attempting to push down the Euro and sovereign bond yields while a major political risk could dissipate – should keep the Euro in neutral gear for the next few weeks. If more significant moves are to develop, they will be due to exogenous factors like developments along the Brexit front (for EUR/GBP) or expectations around US fiscal policy and Fed rate hikes (for EUR/USD).