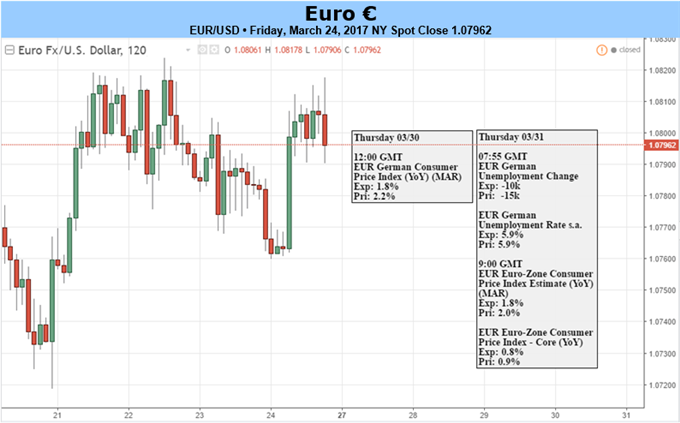 Data out of the Euro-Zone continues to impress, giving the impression that we may finally be seeing the ‘green shoots’ of a European economic recovery taking place. A series of PMI prints on Friday morning with a consistent theme of surprise beats further highlighted this potential as manufacturing, services and composite PMI’s from both Germany and France came-in above expectations. Given that PMI’s (Purchasing Mangers’ Index) are looked at as a leading indicator – the fact that all of these prints came-in above the expectation highlights that optimism is continuing to grow within a key segment of the European economy.

But are we at a point where the ECB is ready to let QE end (in December, 2017), allowing the ‘invisible hand’ and ‘animal spirits’ take over price action in the Euro? That’s the big question surrounding the European Central Bank at the moment, and this will likely persist until we get more signs of a confirmed recovery that could instill the confidence needed within the ECB to let market forces take-over. CPI numbers from Germany and the Euro-Zone as a whole are released on Thursday and Friday of next week, respectively, and each of these will speak to the prospect of continued economic recovery in the EU. But the immediate road ahead is not expected to be smooth as political risk will likely dominate European headlines in the coming weeks.

Dutch elections went through with a minimum of drama; but as we walk into April there’s another election lurking around-the-corner that could keep worries populating around the Euro-Zone, and that’s the French Presidential election set to take place later in the month. A Marine Le Pen win would likely be bad for the Euro, as the candidate has previously discussed the possibility of doing-away with the single currency. More recently, she’s appeared to soften her stance on this issue as she’s now reportedly backing the common currency; and even the prospect of ‘Frexit’ seems a bit more distant now after Ms. Le Pen seemed to moderate her view on this issue after a recent CSA poll indicated that 66% of French voters want to stay in the European Union.

The theme of Euro-weakness around a Le Pen win was highlighted this week after the first round of French debates was largely-considered to have been won by Ms. Le Pen’s primary competitor, Emmanuel Macron. After the debate, the Euro traded higher, eventually coming within pips of the 2017 high in EUR/USD. Given that this Presidential race is considered to be a dead heat at this point, where either candidate can come-out on top; we likely haven’t seen the end of volatility around French elections. The Telegraph’s French election poll tracker is currently showing an even 25.4% probability for both Ms. Le Pen and Mr. Macron, so this race is far from over and this will likely continue to bring some element of impact to the Euro as we move closer to the first round of elections on April 23rd.

In the more-immediate future, next week is when the U.K. will finally trigger Article 50 of the Lisbon Treaty in order to begin Brexit discussions (Wednesday, March 29th). This can be a tenuous issue for traders; but it appears as though the general thought is that Sterling will rally once Article 50 is actually triggered. Deductively – this can bring on Euro-weakness if it does, in-fact, take place. More likely, recent strength in Sterling is resultant of the inflation spike seen in the U.K.’s February CPI report. The simple prospect of ‘less dovish accommodation’ out of the Bank of England could motivate long-term shorts to close out bearish positions in GBP, thereby producing more of a ‘squeeze effect’. And if a plethora of investors are going to be buying GBP in order to cover prior shorts, they’re going to need to find capital from somewhere to do so, and selling USD while at lows may not be an attractive candidate. But regardless of the ‘whys’ it’s the ‘what’ that is important here – and Euro traders should be on guard against Sterling strength this week as Article 50 gets triggered.

The data front for the Euro next week is rather busy; although we have to wait until Thursday before we see any ‘high impact’ announcements when German CPI is released. The following morning on Friday we get more German data with Unemployment figures and later in the session, Euro-Zone CPI data for the month of March is released. Continued beats will drive additional strength to the Euro on the basis of less dovishness out of the ECB; but the predominant factors in Euro price action at the moment appear to be political in nature, so unless these inflation and unemployment numbers come out significantly-above expectations, expect the prevailing winds of political forces to denominate how this data is inferred and priced-in by market participants.

For the week-ahead, the forecast on the Euro will be set to neutral.