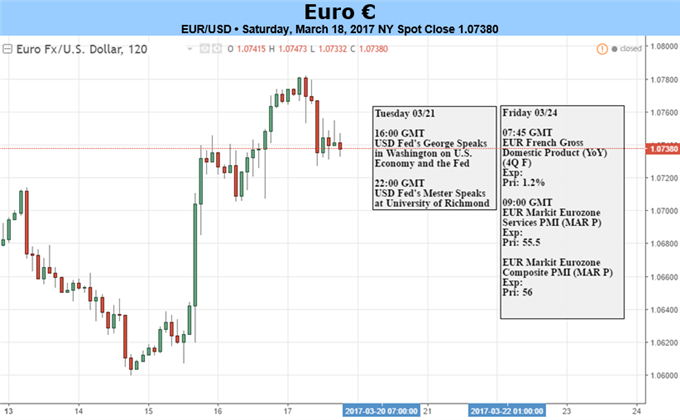 - The rise of protectionism in Europe has hit a speedbump after Geert Wilders was defeated in the Netherlands; if Marine Le Pen loses the French presidential elections, the Euro will have weathered two significant risks.

- Between the ECB’s ‘dovish decision with a hawkish twist’ and the Fed’s ‘dovish rate hike,’ it seems that a run towards parity in EUR/USD spurred by central banks is a distant possibility.

- The retail crowd continues to broadly fade Euro strength, which is a contrarian indicator for further gains.

The rally in higher yielding currencies last week relegated the Euro to one of the two worst performing currencies, although nothing Euro-negative happened, per se. The Dutch elections, which saw right-wing populist Geert Wilders woefully underperform expectations, proved to be a sigh of relief for those market participants looking at it as a litmus test for elections over the coming months (see: France).

Concurrently, with the US Federal Reserve failing to endorse a faster rate hike cycle, the selloff in the US Dollar proved to be a boon for equity markets globally, even as bond yields fell. With the biggest risks of the week proving to be, well, not risky at all, there is little surprise that risk-correlated assets did so well, leaving the Euro behind. EUR/USD gained +0.61% last week, although EUR/AUD lost -1.53%.

For EUR/USD, the gap between in ECB and Fed policies seemed to close slightly over the past two weeks. As discussed in this note last week, the ECB’s policy decision could be characterized as ‘dovish with a hawkish twist’: dovish, as the central bank kept its main interest rate deep in negative territory; but with a hawkish twist, as the Governing Council signaled the end of the emergency TLTRO measures, with a hint at starting to shape future policy statements to prepare markets for a move away from its lower bound of interest rates sometime in early-2018. On the other hand, the Fed’s decision this week was ‘hawkish with a dovish twist’: hawkish, as the Fed raised its main rate by 25-bps; but with a dovish twist, as the FOMC refused to endorse a steeper path of rate hikes through the rest of 2017. A narrowing of policy differences will help support a higher EUR/USD.

It appears that analysts and economists, riding the coattails of the ECB’s policy forecasts, have stopped expecting Euro-Zone data to underwhelm: the Citi Economic Surprise Index for the Euro-Zone has eased from +51.8 on February 17 to +48.1 on March 17. Yet while data has still be generally good, inflation expectations have fallen back with Brent Oil prices receding over the past month, down from $55.81/brl on February 17 to $51.76/brl at the end of the week. The 5-year, 5-year inflation swaps now yield 1.681%, downmodestly during the last month from +1.768% to 1.681% on March 17. 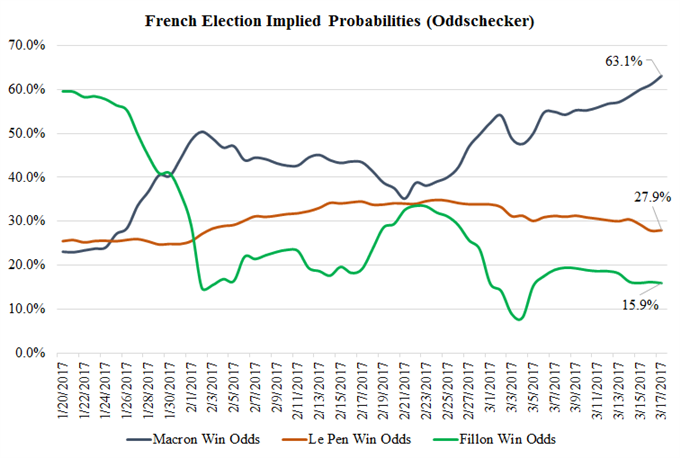 The big major hurdle remaining, now that the ECB, the Fed, and the Dutch elections are out of the way, is the French presidential election. Luckily for the Euro, right-wing ethnonationalist (acting under the guise of populism) Marine Le Pen has seen her odds of winning decline once again this week, providing levity to the Euro. Emmanuel Macron’s odds of winning the French presidency have increased to 63.1% according to Oddschecker, while Le Pen’s have dipped to 27.9%. Speculation around the French presidential remains the most important driver of the Euro, and it continues to drive the Euro in a direction of further strength. -CV