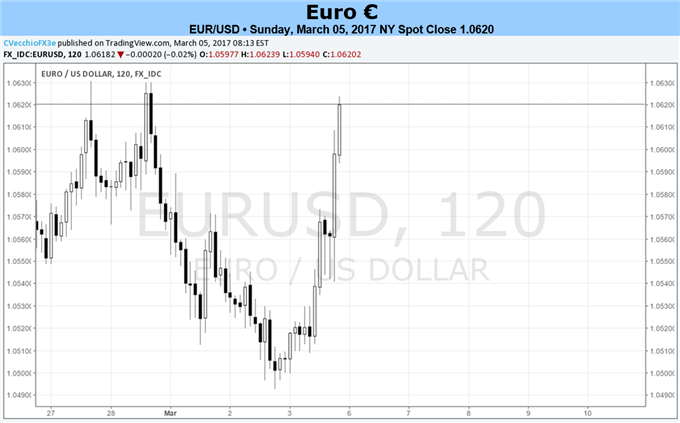 - Euro gained rapidly at the end of last week after French-German 10-year yield spreads tightened, thanks to the collapse of center-right candidate Francois Fillon’s campaign.

- ECB meeting this coming week seems like nothing more than procedural – no changes expected to main rates or QE program; new staff forecasts due, however.

- Retail positioning continues to indicate that EUR/JPY and EUR/USD could rally.

The Euro, despite being down for the majority of the week, finished out Friday on a very strong note, closing up against all of its major counterparts. The brief interlude EUR/USD had below 1.0500 on Thursday was quickly negated by a significant development in the French election sage, which remains the key driver for all EUR-crosses. EUR/USD finished up the week by +0.56%, while EUR/NZD, the best performing EUR-cross, finished up by +3.02%.

We’ve previously mentioned that the place to watch market stress around the French election is in the 10-year French-German yield spread. After closing on February 24 at 74.2-bps, the spread collapsed into Friday, ending the week at 58.5-bps. The signal is clear: the fewer legitimate candidates in the field, the greater the chance that the National Front’s Marine Le Pen is defeated. With more evidence gathering that center-right candidate Francois Fillon’s campaign was unraveling, it appears that the field is being cleared for a runoff between technocrat Emmanuel Macron and far-right populist Marine Le Pen. In polls over the past month, Macron regularly leads Le Pen by a margin of 58-42 or 60-40. Removing the tail risk of a ‘Frexit’ will surely be a shot in the arm for the Euro.

While Dutch elections are coming up on March 15, they’ve had little sway over the single currency. Instead, while we watch French-German yield spreads as a gauge for market anxiety, we must not forget about the upcoming European Central Bank policy meeting this Thursday. While the ECB will be released new staff economic projections (SEPs) due on Thursday, the scope for the ECB to act at this meeting, one way or the other, seems very limited.

To be fair, economic data has been improving steadily in recent weeks, beyond consensus expectations by a wide margin. The Euro-Zone Citi Economic Surprise Index finished last week at +70.0, up from +55.9 a month earlier. On the other hand, despite the German and Euro-Zone CPIs running through +2%, the 5-year, 5-year inflation swap forwards, one of President Draghi’s favorite measures of inflation, have slipped back the past month, finishing at 1.705% at the end of last week from 1.774% four-weeks ago.

ECB President Mario Draghi is likely to balance out his optimism over near-term economic data against longer-term concerns about the political scene in Europe and inflation that has just started to show signs of life near their medium-term target. Similarly, it seems likely that he’ll downplay the ECB’s faith that inflation is returning in a meaningful way, so as to not spook markets into thinking that the ECB will be withdrawing liquidity at a faster than expected pace; the ECB’s ‘taper’ will still amount to over half-a-trillion worth of European sovereign debt purchased through the end of the year. –CV