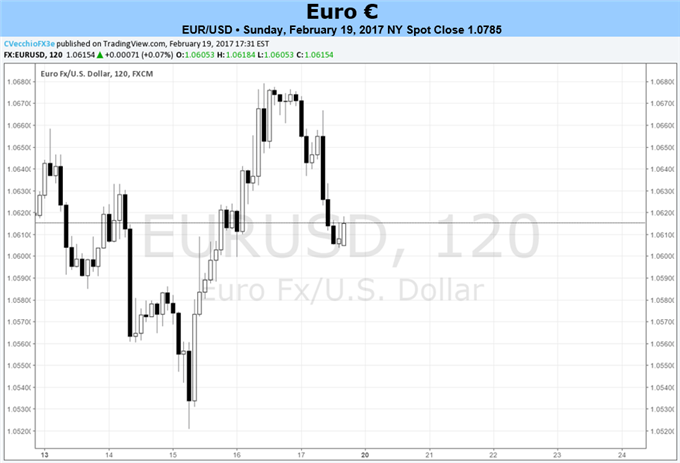 - Biggest news for Euro last week was that ECB will deviate away from capital key ratio in asset purchases, not necessarily a surprise given what happened in December.

- Positioning in EUR/USD has narrowed over the past week, may be close to a turning point.

Despite the onslaught of headlines last week, the dull economic calendar and lack of significant drivers left the Euro mostly lifeless against its major counterparts, gaining no more than +0.38% (EUR/GBP) or losing more than -0.59% (EUR/JPY). The biggest developments came via central banks, with Federal Reserve Chair Janet Yellen reaffirming her stance that rate normalization is well under way, and with the European Central Bank’s January meeting minutes expressing the necessity for asset purchases to deviate from the capital key ratio. Neither development, of course, was a surprise, limiting the impact on the Euro itself; the Fed has made clear its intentions to raise rates at least twice this year time and again; and the ECB said in December 2016 that it would be materially changing the way its QE program was undertaken.

In the week ahead, despite the few economic data releases that are of some significance, they may not leave much an impact in their wakes. The preliminary February Euro-Zone (and individual country) PMI readings are due on Tuesday, but are not expected to show much movement from January (EZ Composite PMI due at 54.4, unchanged). The Euro-Zone CPI reading for January will be released on Wednesday, but is the second release of the data, and no changes are anticipated (headline at +1.8% y/y, core at +0.9% y/y, both unchanged). On Thursday, the second reading of the Q4’16 German GDP readings are due, and, staying with the theme of the week, no changes are anticipated from the first reading (+1.2% y/y).

Generally, underlying fundamental drivers for the Euro aren’t helping propel the single currency forward, which is something that should be monitored from a longer-term perspective. Euro-Zone economic data has started to disappoint relative to analysts’ expectations, as measured by the Citi Economic Surprise Index. The Euro-Zone CESI closed at +41.5 at the end of the week, down from +63.5 one-month earlier. The 5-year, 5-year inflation swap forwards, a measure of medium-term inflation (and one of ECB President Draghi’s preferred gauges) closed last week at 1.768%, barely changed from 1.755% on January 20. Concurrently, Brent Oil prices have barely moved over the last month, closing at $55.81 on February 17 after closing at $55.49 on January 20.

Elsewhere, the relationship between yields and EUR/USD appears to be returning as a driver again. Recall that in the first week of November 2016, when EUR/USD traded near 1.1140, the German-US 2-year yield spread was roughly -145-bps. At the end of last week, with EUR/USD trading near 1.0616, the spread was -200-bps. While the 20-day correlation between EUR/USD and the German-US 2-year yield spread is currently a pedestrian +0.40, a shorter frequency confirms that the significance of relationship between EUR/USD and yieldsis increasing again: the 5-day correlation was +0.84 on February 17, up from +0.07 two-weeks earlier.