Euro May Fall as Monetary Policy Trends Come Back in Focus 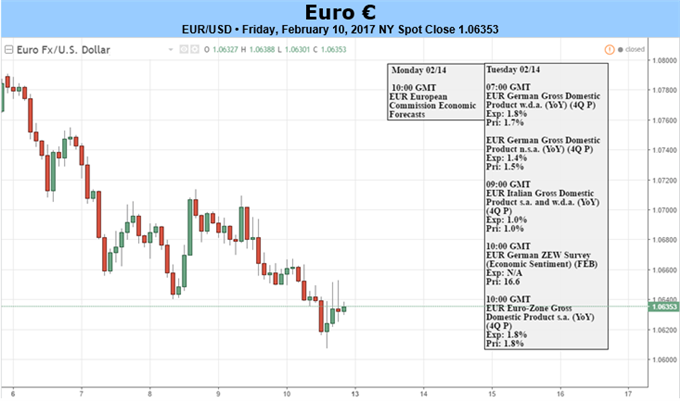 What does retail traders’ positioning say about the Euro’s trend? Find out here !

At surface level, outlook for the Euro seems to be decidedly more complicated than most of its G10 counterparts. Political risk abounds. Populist forces look uncharacteristically strong ahead of key elections in Germany, France and the Netherlands. Italy may yet see an early election against a similar backdrop also.

Meanwhile, the start of Brexit negotiations looms ever closer. UK Prime Minister Theresa May is ably weaving around legal and legislative barriers to meet a self-imposed deadline of triggering Article 50 of the Lisbon Treaty by the end of the first quarter.

Finally, there is the dramatic shift in the tone of US policy with the ascension of President Donald Trump. The new administration has expressed its displeasure with what it sees as an unfairly weak Euro and clashed with ECB President Mario Draghi about post-crisis banking regulation.

Things are not as complex as they appear however. Weigh up the EUR/USD exchange rate against the spread between German and US front-end bond yields and a textbook fundamental narrative emerges – the single currency is falling as its expected rates advantage shrinks.

This makes sense. All that political uncertainty means the ECB is unlikely to change its dovish tune any time soon. Meanwhile, it seems clear that the Fed is aiming to raise rates, even if the extent of on-coming tightening is clouded amid lingering fiscal policy uncertainty.

This means the markets will find relatively little substance in fourth quarter Eurozone GDP figures or Germany’s ZEW survey of analyst sentiment in the week ahead. After all, whatever outcomes cross the wires probably don’t mean much for ECB policy near-term.

Semi-annual Congressional testimony from Fed Chair Janet Yellen may be a more potent catalyst. The Euro may get a lift if a cautious tone trims March rate hike bets. Follow-through may be limited however considering the priced-in probability of an increase is relatively modest at 28 percent.

A late-week meeting of G20 finance ministers in Germany may bring kneejerk volatility if the Trump administration’s combative stance on international trade and FX policy is on full display. A cordial Washington reception for Japanese Prime Minister Shinzo Abe suggests otherwise however.

On balance, an ultimate failure to dislodge the big-picture status quo is likely to bode ill for the single currency. Short-term price swings aside, there seems to be relatively little on offer in the days ahead that has real potential to divert the underlying, yields-based trend.