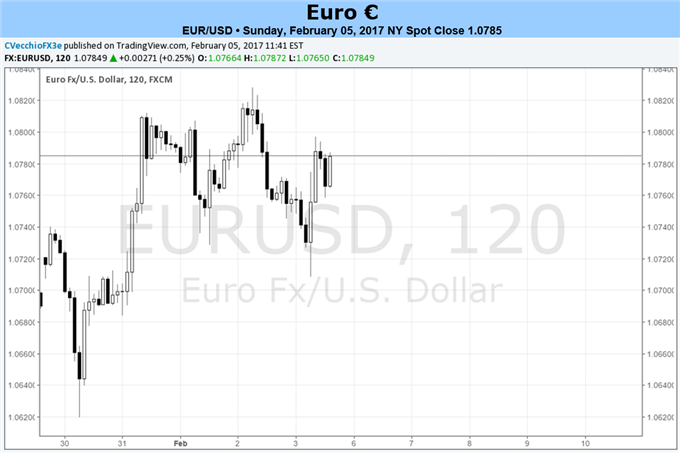 A dramatically quieter calendar this week will leave the Euro without significant drivers, making the newsfeed the biggest risk in the coming days.Instability in markets resulting from policy regime changes is increasing. For the British Pound, the final Brexit vote, while symbolic at this point, is due over the coming days. For the Japanese Yen, questions over the efficacy of the BOJ’s easing program are arising, and like the Euro, questions over the relative strength of the currency compared to the US Dollar are now in play thanks to US President Trump. Finally, for the US Dollar, the unwind of the “Trump reflation trade” is having disruptive effects across global markets.

Perhaps the most interesting development in recent days has been the ‘shifting blame’ for why the Euro is undervalued compared to the US Dollar (on a purchasing power parity basis, EUR/USD should be trading closer to 1.30). US President Trump initially castigated Germany for keeping the Euro weak in order to give their manufacturers a competitive edge; yet German officials have turned around and essentially have said that, yes, the Euro is too weak for Germany, but it’s the ECB’s fault.

Otherwise, the domestic economic data due over the coming days offers little by way of information that could materially impact the market’s current pricing of the Euro (there are zero ‘high’ rated events and only six ‘medium’ rated events – see the DailyFX Economic Calendar for more details).

Generally, however, fundamental drivers for the Euro appear mixed – underlying the directionless drift of the broader Euro complex. Euro-Zone economic data has deteriorated relative to analysts’ expectations, as measured by the Citi Economic Surprise Index. The Euro-Zone CESI eased to +55.9 at the end of the week, up from +51.9 a week earlier, but down from +71.1 on January 6. The 5-year, 5-year inflation swap forwards, a measure of medium-term inflation (and one of ECB President Draghi’s preferred gauges) closed last week at 1.774%, lower than 1.798% on January 27 but higher than the 1.733% reading a month ago.

With central banks and politicians – both monetary and fiscal policy - across the developed economic world seemingly in a state of upheaval, the Euro will be driven by speculation around the British Pound, Japanese Yen, and US Dollar, whose thematic influences are far more compelling in the near-term.