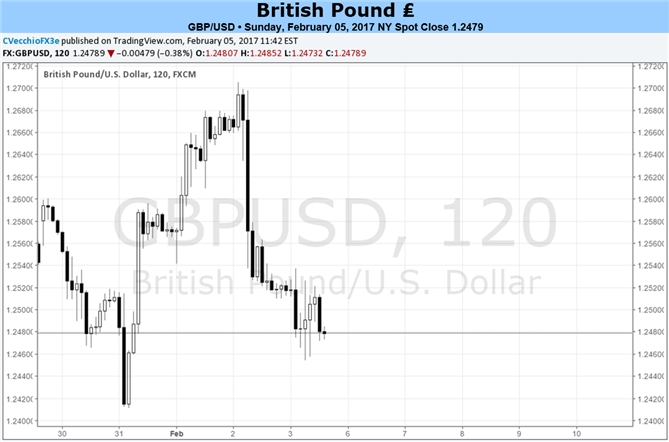 - Focus will be on the Brexit Bill as it enters its Committee stage in UK Parliament.

With politics rather than economics continuing to drive the British Pound, attention in the coming days will be fixed on the Brexit Bill as it winds its way through the Westminster Parliament. Between Monday and Wednesday it will navigate what’s called the Committee stage in the House of Commons, where Opposition politicians can put forward proposed amendments to be voted upon.

Many are likely to be put forward, such as a Parliamentary vote on any exit deal and a second referendum on any final agreement between the UK and the EU. However, with the ruling Conservative Party commanding a majority in the Commons, most if not all are likely to be defeated. Once the Bill completes the Committee stage there will be a third reading of it in the Commons, expected to take place on February 8, which will give the elected Members of Parliament a final chance to approve it before it moves to the House of Lords.

While the referendum vote was initially negative for the British Pound, GBPUSD has been relatively stable since mid-October, and since January 23 has traded in a quite narrow band between 1.24 and 1.27. As traders watch the Brexit Bill meandering its way through Parliament, there’s little reason to suppose that it will move sharply in either direction.

Moreover, there’s little economic data in the coming days to affect it one way or the other. UK trade and industrial production figures for December are due on Friday, but neither release is expected to have a major impact on the pair now that the Bank of England has essentially made it clear that UK monetary policy is likely to remain unchanged for the foreseeable future.

On the other side of the equation, the Dollar has been trending lower despite good economic data, the likelihood of an interest rate increase by the Federal Reserve, perhaps in June, and the continuing possibility of fiscal stimulus that could prompt a Fed response. Concerns about protectionism, a possible trade war and a concerted effort by the Trump administration to talk it down could yet send it lower still – benefiting GBPUSD – but for now that does not seem to be imminent.