Euro Due for More Chop as Inflation Data Point Higher; Draghi on Thursday 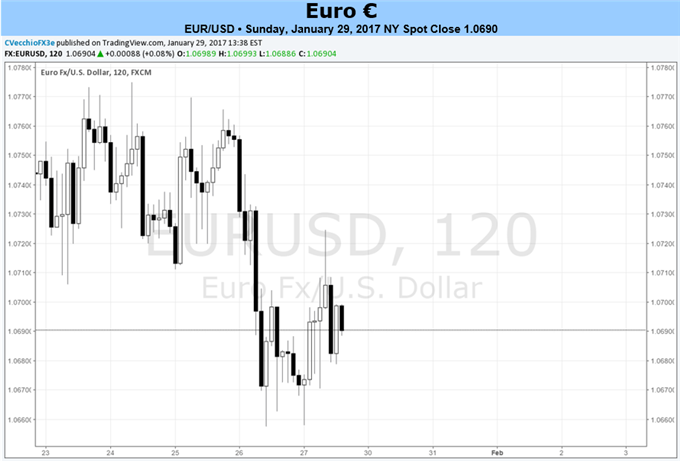 - EUR/USD grind continues, seemingly at the whims of erratic news flow out of Washington D.C.

Despite important data due out over the coming week, there’s not much reason to think that the Euro, broadly speaking, will be able to find much direction. Much like last week, when the Euro’s performance was largely dictated by movements in other currencies – the rally in the British Pound, the ongoing erosion of the US Dollar – the supersaturated calendar over the coming days means the Euro’s own incoming data may take a back seat.

For the Euro, if there are going to be significant drivers that are domestic-born, look no further than incoming inflation data. German data due out on Monday is expected to show that inflation in January 2017 rose to its highest pace in four years. Similarly, Euro-Zone CPI estimates due out Tuesday are forecast to show the fastest rise in prices since July 2013. The other big release on Tuesday, the Euro-Zone Q4’16 GDP report, is expected to show modest growth at +1.7% annualized, nothing to get excited over.

While these developments are promising – rising inflation pressures are exactly what the ECB wants to accomplish with its policies – by no means does this mean that the ECB will back away from its easing measures. While the hawks may be chirping for a withdrawal of stimulus in 2017, ECB President Mario Draghi made clear at the January meeting that low rates and extraordinary policy measures would continue beyond the end of 2017.

While there is a FOMC meeting on Wednesday, it won’t have new SEPs – so there may not be much for traders to work with. Instead, ECB President Mario Draghi speaks on Thursday after the wave of data, which should offer market participants an anchor point to look to in order to clarify the ECB’s thinking on the data preceding the speech; to a certain degree, Draghi could nullify any significant price action in the Euro through the week to date when he reaches the podium.