EUR/USD Set to Face Neutral ECB, Even as Data Improves 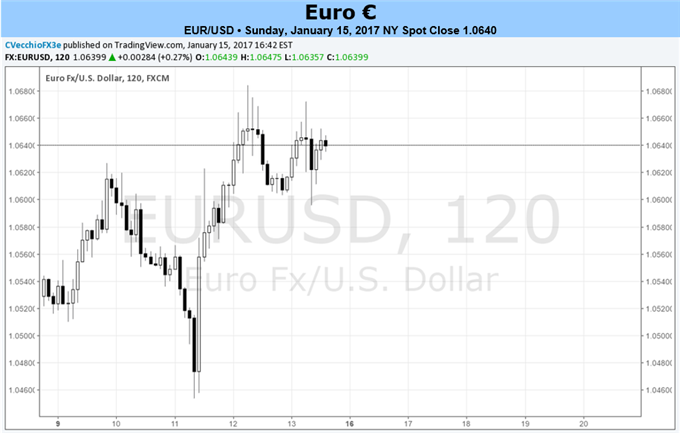 - There are major events due for both the Euro (ECB rate decision) and the US Dollar (Trump inauguration) at the end of the week.

Market volatility continued to increase in the second week of the year, with EUR/USD trading higher by +1.04% to 1.0640 by close on Friday. A further deterioration in the US Dollar’s main fundamental driver – rising US Treasury yields – and ongoing improvement on the data side for the Euro kept the pair buoyed in an otherwise quiet week on the calendar. Yet the days ahead should be more interesting for traders, as the European Central Bank meeting on Thursday will be followed up by what should be an eventful US President Trump inauguration on Friday.

As for what’s directly related to FX markets and EUR/USD, the ECB rate decision will garner most attention. However, given that it is a) the first meeting after they just changed policy in December 2016 and b) that there are now new staff economic projections (SEPs) due on Thursday, the scope for the ECB to act at this meeting, one way or the other, seems very limited.

ECB President Mario Draghi is likely to balance out his optimism over near-term economic data against longer-term concerns about the political scene in Europe and inflation that remains barely positive. To be clear, economic data has been improving steadily in recent weeks, beyond consensus expectations by a wide margin. The Euro-Zone Citi Economic Surprise Index finished last week at +74.1, up from +71.1 a week earlier and up from +63.3 a month earlier on December 16. One of President Draghi’s favorite measures of inflation, 5-year, 5-year inflation swap forwards, are pushing higher as well, finishing at 1.745% at the end of last week from 1.666% four-weeks ago.

If data continues to improve, we would expect that market pressure on the ECB to back away from its most aggressive easing policies would increase. One year from now, market participants think that the ECB will be closer to a rate hike (17.5% chance at the January 2018 meeting) than a rate cut (13.4%). Yet to do so, we believe that the ECB will need to see a meaningful improvement in actual inflation readings; the latest ECB forecasts see inflation ending 2017 at +1.1%. If this proves reality, then the ECB might opt for another tweak in its policy, extending the length of its QE program but reducing the pace of purchases.

Any such announcement would come at a meeting with a new set of SEPs, which come in March, June, September, and December. Accordingly, the coming ECB meeting on Thursday may bring a lot of hype, but it seems very likely to be a rather neutral meeting that may not wing the pendulum of understanding about the ECB’s next move. If US Treasury yields take another step back, then EUR/USD could easily trade above 1.0700, which would constitute more signs of near-term basing by the pair.