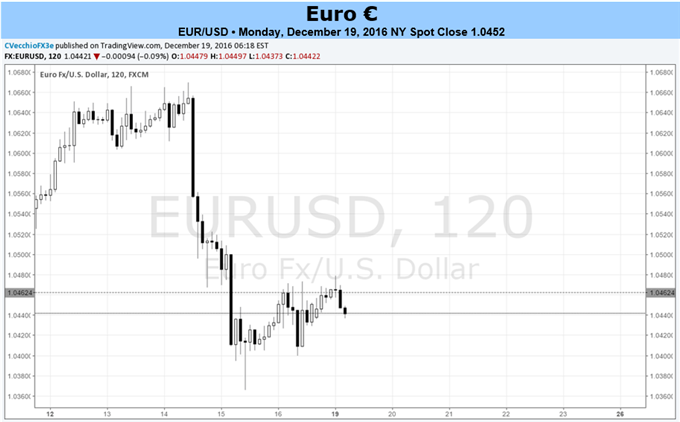 - EUR/USD weakness sets in thanks to steeper Fed rate hike expectations, which should continue to drive rate differentials in the near-term.

- Quiet economic calendar on both sides of the Atlantic keeps focus on how market is pricing event risk for 2017.

In what will be an admittedly quiet week on the economic calendar, the Euro finds itself in a precarious position heading into the final weeks of 2016. There was but one somewhat significant economic data release on the calendar today, but the German ZEW survey, despite its increasingly positive sentiment, isn’t the type of information that could help the Euro stage a prolonged rally.

With lurking political risks becoming more apparent across Europe, financial risks are starting to rise in periphery countries. In Italy, the country’s oldest bank, Monti dei Paschi, just launched a €5 billion cash call – a liquidity injection from shareholders – in an effort to avoid needing a bailout from the newly-minted Paolo Gentiloni government. Elsewhere, with Brexit negotiations highlighting the discrepancy in opinion between establishment Eurocrats and populists in the UK, it’s not a far stretch to imagine that certain election results in France, the Netherlands, or Germany over the next year could drive a stake into the heart of the Euro project.

On the central bank front, with the Federal Reserve signaling the potential for three rate hikes next year while the European Central Bank kicks its easing program into the next gear, market forces have started to push EUR/USD lower. On the Fed’s side, the decision last week to signal three rates in 2017 – as opposed to the market-priced two ahead of the policy statement – has sent US Treasury yields higher, and in turn, firmed up the US Dollar.

The ECB’s decision in early-December to alter how its QE program is undertaken can erode the market’s desire to hold Euros over the medium-term. Previously, yield curves in Europe were flattening as investors front-ran ECB bond-buying: with the ECB saying it wouldn’t buy debt with yields to maturity below the deposit threshold of -0.400%, there was a scarcity effect along the yield curve. This is no longer the case now that the ECB will buy bonds at any YTM, which reduces the need to go further down the curve. Concurrently, with the decision to buy 1-year debt, the ECB has signaled that it is basically altering policy to be able to keep the front-end of European yield curves pinned to the floor. 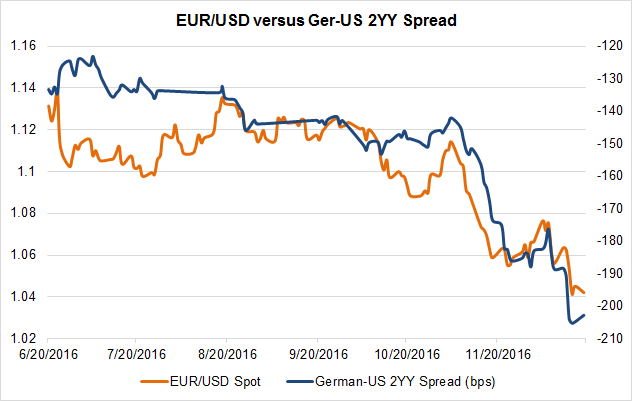 In conjunction, these twists and shifts in the US Treasury and German Bund yield curves have pushed out the German-US yield spread. This will be the most important factor to watch for EUR/USD going forward, particularly as the relationship between yields and EUR/USD appears to be such a significant driver. In the first week of November, when EUR/USD traded near 1.1140, the German-US 2-year yield (“Ger-US 2YY spread”) spread was roughly -145-bps. Today, with EUR/USD trading near 1.0420, the Ger-US 2YY spread is -203-bps. The 20-day correlation between EUR/USD and the Ger-US 2YY spread is currently +0.833, confirming the significance of relationship at present time. –CV