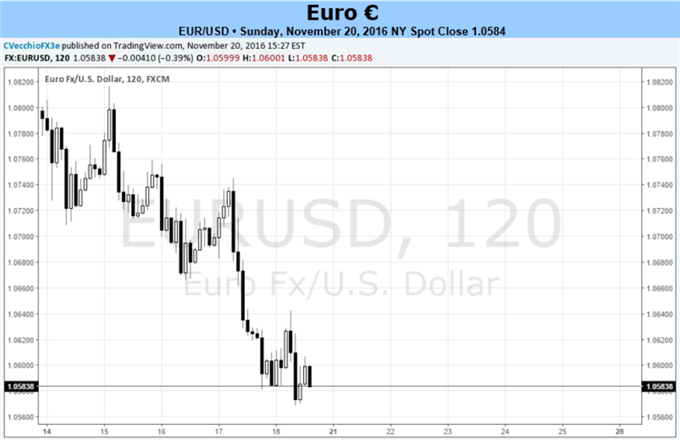 - Rising US yields helping US Dollar as inflation expectations rise on President-elect Trump stimulus hopes; rising European yields due to unease over political situations in Italy and France.

- Seems likely that the ECB will hold its course, make slight alterations to QE program in December.

The Euro continued to drift broadly lower through the middle of November, weighed by the emergence of political risks on both sides of the pond. For the second consecutive week, EUR/USD traded sharply low, closing at 1.0584 for a loss of -2.52%. Of course, the US Dollar is being drive by the Trump reflation trade, which is pushing up both nominal yields and inflation expectations, sending the US-German 2-year yield spread to its widest level in 27-years this past week.

Yet President-elect Trump’s win seems to have reinvigorated populist sentiment across Europe – ‘If the UK can Brexit and the US can elect Trump, why not us?’ – which may also be feeding into rising political risk across the continent. With the Italian constitutional referendum coming in on December 4, and it looking increasingly likely that it will fail to pass, the Italian BTP 10-year yield has shot up to its six-month high, closing the week at 2.089%. Similarly, with Marine Le Pen of the French National Party – France’s Donald Trump or Nigel Farage, if you will - gaining quickly in polls ahead of the 2017 French election, the French OAT 10-year yield is also near its six-month high, at 0.754%.

In the event that political risks in the Euro-Zone continue to build up, there is ample room for market participants to drive down the single currency in the short-term. Among futures traders, non-commercials are only holding 119.2K net-short short contracts through the week ended November 15, 2016. Relative to the all-time extreme set at the end of March 2015, when there were 226.6K net-short contracts held, bearishness towards the Euro isn’t that significant at present time.

Given the calendar over the coming week, impacted by holidays in the United States, meaning liquidity will effectively be running at only partial saturation for most of the week, there are few upcoming instances to look for new guidance on the Euro. However, between Tuesday and Wednesday, traders may find new information to help shape their outlooks headed into the first week of December. On Tuesday, European Central Bank President Mario Draghi will be in the European Parliament, and it is difficult to envision him signaling the withdrawal of stimulus any time soon.

With that said, markets continue to price in no ECB rate cut this year, with a 0% chance of a 10-bps rate hike next month, per overnight index swaps. If ECB President Draghi does offer insight into the ECB’s next steps, we’ll be focused on hearing what they intend to do with their capital key and deposit threshold requirements. Otherwise, with yields shooting up across the Euro-Zone, it is possible that a failure by Draghi to soothe nerves could push on ‘taper tantrum’ type conditions.

Looking down the calendar, the docket is rather light in terms of significant economic data. That said, on Wednesday, there are several European growth indicators due, of note the preliminary Euro-Zone, German, and French PMI readings for November.Signs that economic activity is starting to moderate in the wake of the US elections – perhaps a sign of fears that the wave of populism with crash back onto Europe’s shores – could be foreboding as we move into a few week weeks.