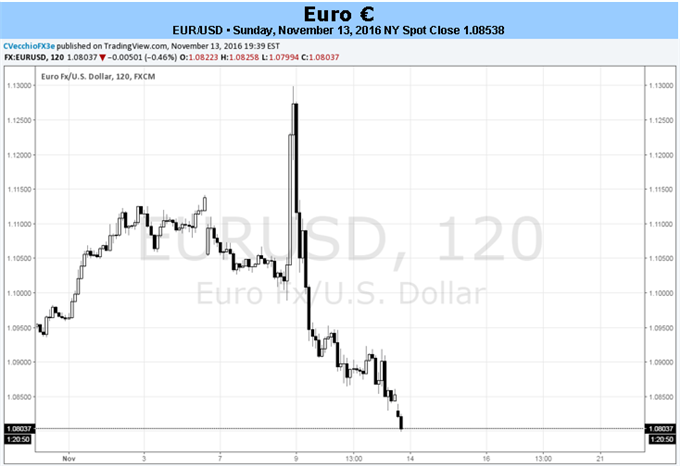 - Seems likely that the ECB will hold its course, make slight alterations to QE program in December.

An exciting end to the week for EUR/USD marked an exciting week for the Euro complex, broadly speaking. After the dust settled around the US Presidential elections,it should be of little surprise that the risk rally relegated the Euro to the back of the line as a funding currency. EUR/GBP fell the most, by -3.28%; EUR/USD by -2.63%; while EUR/JPY gained a mere +0.76% in comparison. Risk appetite has been boosted globally it seems by the Trump reflation trade, given the wave election for Republicans and odds of gridlock ending in Washington DC.

With that said, there is little reason to think that the Euro, broadly speaking, will find direction over the coming week outside of its recent fundamental drivers. Markets continue to price in no ECB rate cut this year, with a ~7% chance of a 10-bps rate hikenext month, per overnight index swaps. The recent dip in EUR/USD can be attributed not to the Euro’s, but the US Dollar’s rate expectations moving: over the past week, December rate hike odds have gone from a low of 51% to 84% by Friday.

Elsewhere, inflation expectations for the Euro-Zone continue to edge higher, keeping markets focused on a small alteration in the size and scope of the QE program rather than a rate cut. The 5-year, 5-year inflation swap forwards, a market measure of inflation expectations, jumped over the past week-plus, from 1.456% on November 4 to 1.541% on November 11. Stable energy prices in the near-term – but significantly elevated relative to this time last year – are providing a base effect or tail wind to inflation.

Overall, economic conditions for the Euro-Zone remain stable, further underscoring the lack of near-term drivers from the Euro itself. The Citi Economic Surprise Index for the Euro-Zone dropped to +34.6 by November 11, down from +36.2 a week earlier – barely changed overall. The Euro economic docket for the coming week has several important events on it, like the Q3’16 Euro-Zone and German GDP readings, both due out Tuesday; both are second readings and therefore carry much less significance. If EUR-crosses are volatile this week, it’s more likely than not due to the other, non-EUR component; if the Euro is in the driver’s seat, it probably won’t be for a good reason. –CV