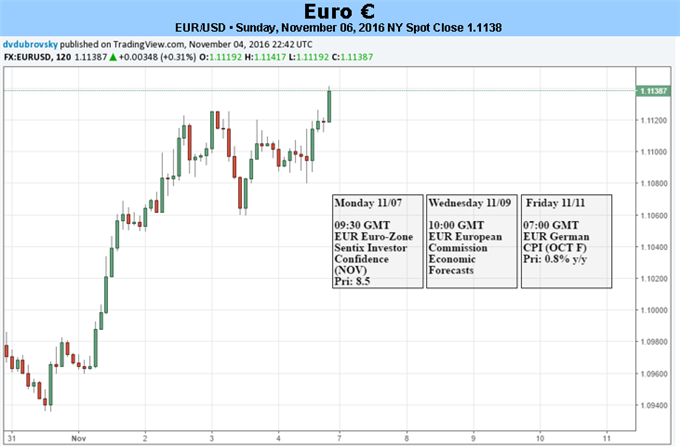 Let's Not Pretend Otherwise: Only One Thing Matters for EUR/USD This Week

- Given the upcoming economic calendar, there is only one reasonable conclusion: markets have become increasingly concerned with the outcome of the US Presidential elections on Tuesday.

The Euro, on the whole, had a rather unexciting week: EUR/GBP traded slightly lower on the back of some positive developments along the Brexit front; and EUR/CAD traded somewhat higher on the back of ongoing weakness in energy markets. Yet the most interesting pair of the past week has been EUR/USD, which has been seemingly untethered from any of its longstanding thematic influences: speculation around the European Central Bank’s QE program; or speculation around the timing of the Federal Reserve’s next rate hike. It’s fairly obvious what the reason for the disconnect in EUR/USD has been due to recently, but we’re going to arrive at the conclusion deductively to prove our point.

On the Euro side of the equation, economic and market developments did not suggest an improved fundamental backdrop that would necessarily entice traders into increasing their Euro-specific exposure. Medium-term inflation expectations, as measured by the 5-year, 5-year inflation swap forwards, fell to 1.456% on November 4 from 1.477% a week earlier. Generally, data released the past few days disappointed, with the Citi Economic Surprise Index for the Euro-Zone declining from +43.5 on October 28 to +36.2 on November 4.

If we can deduce that that there are no recent positive Euro-specific drivers in the near-term related to the overarching theme of the ECB’s easing, then we must examine the US Dollar side. Given the big picture for the US Dollar – when will the Federal Reserve hike rates next – our inclination is to turn to rates markets to see if pricing has shifted. No such evidence exists. Fed funds futures priced in a 78% chance of a 25-bps rate hike in December by the end of last week, up slightly over the prior five days.

We arrive at the necessary conclusion that, if matters related to ECB easing or Fed tightening are not shifting in manners that would point to EUR/USD strength, then there must be another variable with significant influence over price action. Deductively, we can say that this new influence – one which is proving more powerful than the two main drivers of EUR/USD over the past two years – is the rising political risk of the US Presidential election.

As we discussedon September 27, "...with each passing day, the polls regarding the election will matter more and more to markets (stocks, bonds, FX—you name it), and in turn, speculation around the Fed will matter less and less.” I would strongly argue that the Fed has become a function of the election itself: the US Dollar is moving lower in tandem with the rebound in Trump election odds on betting sites and on poll aggregators likeRealClearPoliticsorFiveThirtyEight.

The implication for the Fed is explicit;forget the candidates' personalities and focus on the policies instead. The question to ask is, "Where would a President Clinton's fiscal policy be relative to that of President Obama’s? What about under a President Trump?" Putting this on a bell curve, with the current Obama fiscal policy as the baseline, the results are clear: Clinton's plans reside close to the center of the bell curve; Trump's are out on the tail. Again, this is a relative basis; not a commentary on the efficacy of either candidates' personalities or politics.

Considering this point of view, then, should Clinton be elected, the FOMC would likely be able to retain its current set of growth and inflation forecasts and continue with its current plan for normalizing rates (i.e., hike rates in December). However, given the significant shift in fiscal policy and its resulting impact on the US economy should Trump be elected (for better or for worse), the FOMC would have to alter its forecasts. Such an event would cater to a hold in December.

Amid an otherwise bland economic docket this coming week, the US Presidential election is the paramount influence on EUR/USD by a wide margin – let’s not pretend otherwise. If Clinton wins, EUR/USD should quickly shake off the recent built-up political risk premium, allowing EUR/USD to return to its recent lows in the low $1.0800s. On the other side, because of the likely hold in Fed policy in December, EUR/USD’s initial reaction to a Trump victory would likely be a move towards the August highs around $1.1360.