Euro Playing Catch Up with Brexit Fears, Not ECB Speculation 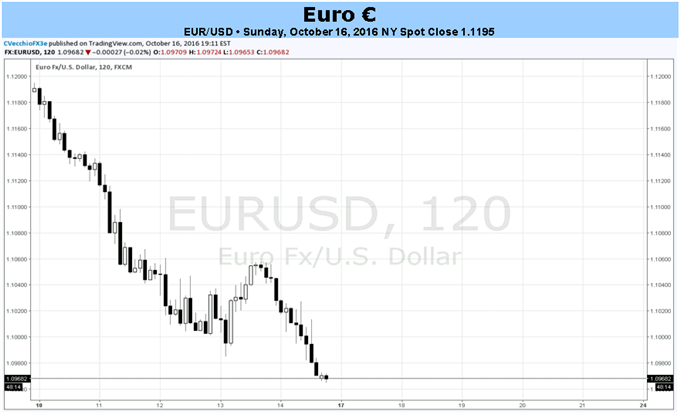 The Euro endured a rough, choppy week of trading asEUR/USD exited its symmetrical triangle to the downside, thanks to a barrage of small issues piling up: financial (Deutsche Bank); political (Brexit); and geopolitical (Russia). Among the EUR-crosses, EUR/CAD (-3.31%) and EUR/AUD (-2.57%) led to the downside, while EUR/GBP even finished lower by -0.09%.

Whereas Q3’16 was quiet for the Euro, the first two weeks of October have seen volatility and volatility expectations rise. Realized volatility has increased markedly, with 1-week historical vol jumping from a low of 2.21% on October 4 to 9.73% on October 14. Measures of implied volatility have trended in the same direction: sharply higher. Traders shouldn’t expect the more recent violent gyrations in the EUR-crosses to dissipate soon, especially with several issues not directly related to the Euro itself – the Fed rate hike cycle, the British Pound’s fall due to Brexit, among others exerting greater influence over the Euro.

Over the next few days, domestic issues should reassert themselves over the Euro, especially now that several European Central Bank policymakers have dismissed the notion of the ECB tapering its QE program in the immediate future. As pointed out in a Bloomberg Brief on Friday, over the course of the week two separate ECB officials spoke to this very issue. ECB Vice President Vitor Constancio saidthe Governing Council “has not discussed anything about the timetable of QE.” Similarly, the ECB’s Vitas Vasiliauskas (a more hawkish policymaker)said “it is very important not to speak about exit,” ‘exit’ being the end of the QE program. If there is an adjustment announced at some point (unlikely at the ECB rate decision this Thursday), it will be to adjust the QE program to ensure that it can run for longer (in other words, to make sure it is sustainable and won't need to be tapered abruptly).

Several ECB policymakers’ non-taper affirmation may be contributing to the recent decline in EUR/USD, but not much more than that; markets aren’t pricing in a greater likelihood of the ECB cutting rates again this year. Overnight index swaps continue to hover around a 15% chance for a 10-bps cut to the ECB’s deposit and main refinancing rates, as they have for the past three weeks. For the first time in what seems years, the Euro’s drop can be attributed to something other than ‘ECB speculation.’

What is that ‘something other’ that is driving the Euro lower, then? We would argue that it’s the British Pound and the threat of a ‘Hard Brexit.’ While a messy divorce is sure to hurt the UK economy in the short-term (via lower UK living standards) more than the Brexiteers promised/deceived, it also poses a long-term, existential threat to the European Union and the Euro. With the Italian constitutional referendum in December and five elections in core countries in 2017, a ‘Hard Brexit’ could have unintended consequences if EU leaders are too brazen and petty in their negotiations.

Consider the position of European Union leaders: “there must be a price,” as French President Francois Hollande said (see: the October 6 British Pound flash crash). This comment from the French president isn’t unique; and as such, in general, EU leaders have missed the whole point: the populist flames across Europe are being fanned by the sprawling, anti-democratic, stagnant mess the European Union has become.

By attempting to punish the UK for exercising its right as a sovereign entity to leave this geopolitical arrangement, EU leaders will only embolden populism and heighten the risk of an EU breakup down the road. Voters in Italy, France, and Germany, among others, are watching Brexit very closely. Current EU leadership is too clever by half; markets are watching, and the Euro is all the worse for it.

In the meanwhile, Euro-Zone CPI data and the ECB rate decision this Thursday should help keep volatility elevated as well. Though, the recent rise in Euro-Zone inflation expectations, particularly if the upcoming September CPI data meets expectations, may be one more reason the market has to keep speculation around the ECB cutting rates to a low hum. –CV