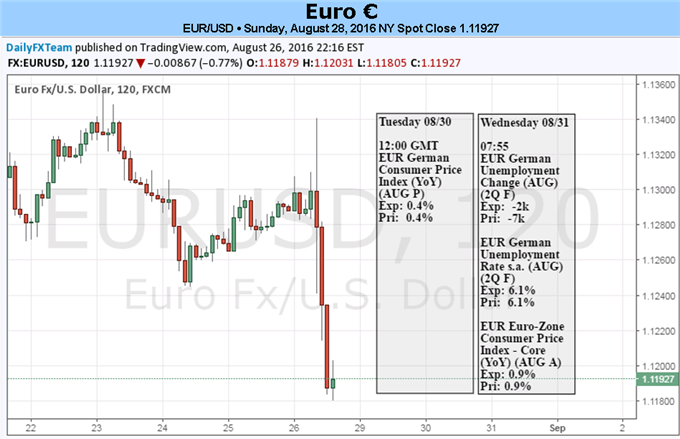 As August Winds Down, Euro's Weaknesses Come to Light

- ECB may not be done easing this year, yet markets aren’t pricing action.

After meandering around for several weeks, EUR/USD broke decisively lower on Friday, perhaps marking an abrupt end to the summer volatility lull. EUR/USD weakness (-1.13% on the week) was not a sign of broad Euro weakness, per se; the Euro’s performance was mixed across the board. EUR/GBP led the way lower by -1.61%, while EUR/JPY, buoyed by resilient equity markets, rose by +0.47%. First, I’ll address the abrupt weakness in EUR/USD, then I’ll discuss whether or not there are reasons to be concerned about the Euro more generally.

EUR/USD: Was This ‘The Turn’ into the September FOMC Meeting?

My first thesis: there was a market event on Friday that broke an important relationship keeping EUR/USD in check for the past two months. Since the Brexit vote on June 24, interest rate pricing markets on both sides of the Atlantic have experienced a high degree of volatility – but they’ve moved in tandem, in a relative sense.

As a reminder, pre-Brexit, there was a modest chance of a Fed rate hike by December 2016 (per Fed funds futures contracts, an implied probability of 39% on June 23), and there markets were on the fence about an ECB rate cut being by the end of 2016 (per OIS, 50% on June 23). In the wake of the Brexit vote, market expectations quickly shifted: no Fed rate hike was priced in until at least the end of 2017; and like OIS, EONIA markets began to price in at least one 10-bps rate cut by the ECB between September and December 2016.

More or less, these shifts in both Fed (hawkish to neutral, and back) and ECB (neutral to dovish, and back) rate expectations occurred in tandem. As Brexit concerns have spiked then abated over the summer, December 2016 Fed rate hike expectations have been pulled forward (from around 8% on July 7 to 44% on August 25) and the odds of an ECB rate cut by December 2016 have dropped significantly (from approximately 80% on June 27 to approximately 39% on August 25).

If you’ve noticed, I’ve benchmarked the interest rate movements through Thursday, August 25, because on Friday, August 26, this interest rate pricing dynamic changed abruptly – there was no parallel movement. ECB rate expectations barely moved between Thursday and Friday, with OIS showing a modest 36% chance of a 10-bps rate cut by this December. Yet after markets digested Fed Chair Janet Yellen’s Jackson Hole Economic Policy Symposium speech on Friday, Fed funds markets were disrupted in a major way: odds of a December 2016 rate hike shot up from 44% on August 25 to 65% on August 26.

Putting the dramatic bearish outside engulfing bar into context, it seems the interest rate dynamic breaking abruptly now puts immediate focus to the downside in EUR/USD into the September FOMC meeting. Conveniently, this fits with the 20 year seasonality pattern, which has been calling for EUR/USD to close August in the red.

My second thesis: if there is a case for additional immediate weakness in EUR/USD, peripheral indicators of economic and financial activity suggest the Euro’s fundamental standing is eroding. Likewise, the ECB may be signaling it will act again, which market pricing has yet to reflect.

August has been a quiet month thus far for the Euro, news wise, but this may simply be a function of an exhausted market participant population now taking summer holiday. Once the European masses return from their getaways – the end of August in particular is the busiest time of the busy season – attention should quickly return to the consequences of Brexit, Italy’s upcoming constitutional referendum, and the march to elections in the European core.

In this vacuum of news, there has been a slight deterioration of economic data relative to expectations. The Citi Economic Surprise Index for the Euro-Zone has edged lower from +28.3 on July 29 to +21.2 on August 26. Concurrently, with energy prices behaving erratically once again, inflation expectations have been driven lower. The 5-year, 5-year inflation swap forwards, a market measure of inflation expectations, fell back to 1.307% on August 26, from 1.340% on July 29.

These subtle shifts in market indicators over the past few weeks warns that, in the absence of news otherwise, the recovery in Europe remains weak and fragile. Complacency is running higher, which breeds opportunity for surprise and disappointment. Should data continue to miss expectations, there’s plenty of room for markets to speculate on more dovish policy action by the ECB – after all, there’s only approximately a 36% chance of a 10-bps rate cut by this December.

The chances of ECB action again this year may be underpriced, if data misses further and European fiscal authorities dither further. European Central Bank Executive Board member Benoit Coeure, at the Jackson Hole Economic Policy Symposium, said this week that “if other actors do not take the necessary measures in their policy domains, we may need to dive deeper into our operational framework and strategy to do so.” Translated from his economic jargon: “if politicians don’t stop fooling around, then the ECB will have to ease again.”

Window May Open for More ECB Action before 2017 Rolls Around

What reality is: ‘politicians aren’t going to stop fooling around, so the ECB will ease again.’ As reality sets in, interest rate markets will pull forward rate cut expectations (OIS currently sitting at approximately 36%, if you recall), helping drive down the Euro broadly. Against that backdrop, as market participants come back from their summer holiday over the coming week or two, keep an eye on positioning data, as the month of August saw traders unwind their short Euro positions in the futures market. Speculators reduced their net-short Euro holdings to 76.6K contracts through the week ending August 23, down from 112.6K contracts during the week ending July 26.

To recap: EUR/USD’s turn lower looks legitimate, supported by the sharp break in the interest rate pricing dynamic between the Fed and the ECB. Elsewhere, while the Euro isn’t showing signs of consistent weakness, there are pieces of evidence emerging suggesting traders should be more critical of the Euro. Should Euro-Zone data continue to erode, the ECB has indicated a willingness to ease further, which at this point in time isn’t being reflected in market pricing. To this end, with net-short Euro positioning in the futures having subsided over the past month, there is plenty of room for traders to pile in and drive the Euro lower again. –CV