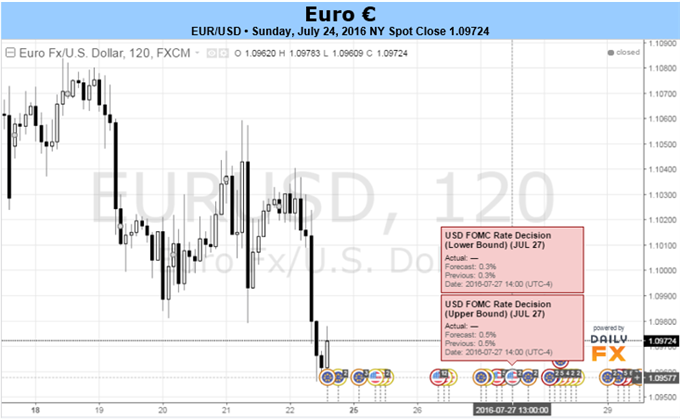 On balance, the Euro steadied as we passed into the second half of July, although EUR/USD lost some ground (-0.54%), putting in its lowest closing prices in the post-Brexit world. Elsewhere, one axiom of the post-Brexit world held true: the ‘Europe-centric’ versus ‘Asia-Pacific’ remained (we first noted this developing relationship two weeks back). Sure enough, there were the Australian and New Zealand Dollars and the Japanese Yen at the bottom of the pile versus the Euro last week.

There is a fundamental tug-and-pull at work for the Euro, Brexit related existential concerns aside (more on Italian banks in a minute). As evidenced in Thursday’s European Central Bank press conference, policy officials may have a dovish tilt, but they are neutral in the near-term. Financial market stability (equity markets are rallying seemingly non-stop) coupled with economic data coming in marginally better than anticipated has cultivated an environment allowing the ECB to stay put until at least September, when it next updates its staff economic projections (SEPs).

Speaking of economic data, the Citi Economic Surprise Index has improved to +8.0 on July 22 from -8.6 on June 20. Pressing its July highs, the gauge of Euro-Zone economic data momentum is close to reaching its yearly highs (obvious caveat: it’s an index of relativity, so it’s only good as its inputs – economists). Digressing, there’s not much here that’s negative; what’s driving EUR/USD must be borne elsewhere.

One place to start looking for reasons why there’s been a turn lower anew in EUR/USD is inflation expectations. The 5-year, 5-year inflation swap forwards, a market measure of inflation expectations, fell sharply over the past week, from 1.360% on July 15 to 1.314% on July 22. Accordingly, as ECB President Mario Draghi indicated as much during his press conference on Thursday, we know that the door for more action isn’t closed. With inflation expectations declining, markets continue to price new easing measures coming by year-end; EONIA rates markets are leaning towards a 5-bps rate cut by December (chart 1 below), or implicitly a 50% chance of a 10-bps move cut. 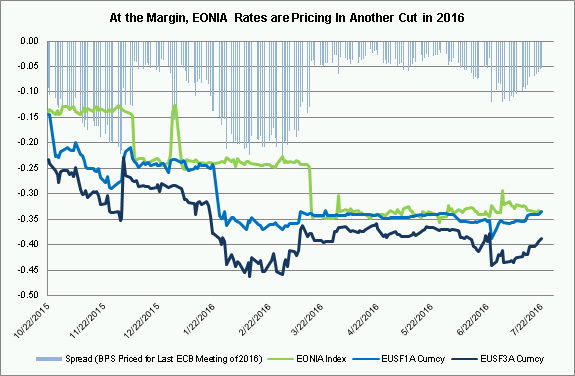 From another perspective, overnight index swaps, we can see that traders also believe that the ECB will cut its main refinancing rate or deposit rate again this year (charts 3 & 4 below).

Now that market measures of ECB rate cut expectations are being pulled forward relative to pre-Brexit, traders have started shorting the Euro. According to the CFTC’s most recent COT report, non-commercial futures traders held -99.9K net-short Euro contracts – the most since the last week of January 2016. From the week ended June 21 (the last reporting period pre-Brexit), speculators have increased shorting Euro positioning by +62.8%.

Let’s put this all together. The Euro is stable but slipping versus the US Dollar, in spite of the fact that European economic data momentum is improving. Instead, on the Euro’s side, eroding inflation expectations are boosting expectations of another ECB rate cut by the end of the year; both EONIA rates markets and overnight index swaps are essentially pricing in a coin toss’s chance of a cut by December. Add in the fact that, on the US Dollar’s side of the equation, Fed rate hike expectations are rising rapidly - pre-NFP, markets were pricing in January 2018 as the most likely period for the next hike, at the end of last week it was September 2017 – there seems to be the ideal near-term mix for further EUR/USD weakness.

We’d be remiss if we didn’t mention Italian banks in this piece. (For a primer, read our piece from last Sunday, “Brexit’s True Impact on Euro Will be Felt via the Italian Banking System.”) There is a potential major milestone coming up this week, with the European Banking Authority and ECB stress test results due out on July 28. Evidence that the Italian banking system is rife with failing institutions could provide the spark necessary to begin the recapitalization process. For a country whose banks have some €360 billion of non-performing loans (NPLs) on their balance sheets, a bailout/bail-in is all but guaranteed. –CV