Realization of Brexit is a Potential Nightmare for the Euro 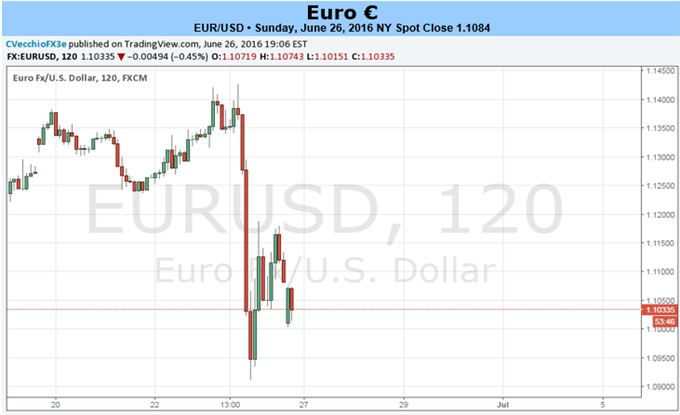 - A new regime of higher volatility has arrived thanks to the UK’s Brexit vote.

What was once a seemingly meaningless short-term political compromise for David Cameron has now morphed into the potential to be a living nightmare for the Euro: the United Kingdom has voted to leave the European Union. If you recall in the run-up to the May 2015 General Election, then-UK Prime Minister Cameron promised to hold a referendum on the UK’s membership in the EU in order to appease the right-wing of the Tory party and the rising swell of UKIP. It’s proven to be a costly political gamble that has roiled global markets, and will influence the Euro for months and years to come.

There is no reason to undersell this moment. There were clear signs over the past few months over the potential impact of a Brexit on the Euro, such that the rapid depreciation in the Euro after the Brexit vote shouldn’t be a surprise. Indeed, starting in February 2016, the Euro started to become increasingly sensitive to Brexit-related headlines, shadowing the British Pound’s decline. By the end of Q1’16, markets globally, especially the Euro, were proving vulnerable to Brexit fears. Accordingly, we titled our Q2’16 Euro forecast, “EUR/USD Stuck in No-Man’s Land Headed into Q2’16; Don’t Discount ’Brexit’” in anticipation of the growing risk. As we said at the time, which is proving true now, is the Euro is having a “political moment.”

The whole premise of the European Union project, going back to its humble beginnings rising from the ashes of World War II as the European Coal and Steel Community, was to promote an economic vision of a unified Europe where, regardless of the language you spoke, the country you lived in, or culture you partook in, you were a European at heart. When we fast forward to present day, the implications of a Brexit are significant at a time when (1) a crippling debt crisis has sapped sovereignty from peripheral European countries, (2) the Syrian Civil War has produced an uncontrollable wave of refugees that has revealed infrastructure issues and (3) considerable security concerns to the point that countries have threatened to renege on their Schengen Area duties to close their borders.

The very heart and soul of Europe is at stake from a litany of perspectives; the uncertainty around the answers to these questions means volatility for the Euro.

As we said each of the past two weeks as Brexit tensions mounted, the Brexit component for the Euro is clear: it raises the question of how permanent being a member of the European Union actually is. If the British are allowed to leave the European Union, recent polls from various countries – peripheral and core alike – have showed that populist backlash against the pan-European project is growing. Polls have emerged from Germany, Holland, and Italy in recent weeks that suggest at or near 50% of citizens would support a UK-like referendum regarding their own respective memberships; indeed, in the hours (minutes? seconds?) after the Brexit vote was announced on Friday, politicians in Italy, France, and Holland all called for UK-like referendums in their own respective countries.

The Spanish election results on Sunday are a promising vote of confidence from the Euro-Zone’s fourth-largest economy, if not a sign of a population that has heeded the Brexit fallout as a warning. The main Spanish stock index fell by over -12% on Friday, its largest single day loss in over thirty years – yes, a sharper selloff than anything seen during the depths of the height of the 2008 GFC.

Volatility in markets and the uncertainty around the long-term viability of the EU will likely put a small but noticeable chill on economic activity, which conveniently gives the European Central Bank cover to ease further, something the Euro-Zone desperately needs. Overnight Index Swaps markets have dragged forward expectations for a rate cut by September 2016 (62%), suggesting that markets feel liquidity assistance will be necessary as uncertainty persists (there are signs of funding pressures increasing). Anticipation of ECB action could weigh against the Euro, as it has done consistently over the past five years. 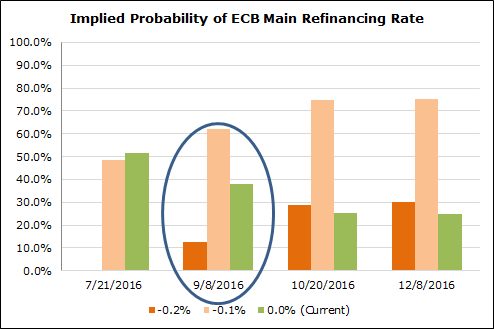 Moving forward, there’s increasingly less certainty given the complexity and significant implications of the Brexit vote. Somewhat positively, the market reaction on Friday may have served as a warning sign of how the world feels about leaving the EU (not good!), which may have helped the Spanish elections. Other populations may be less apt at sprinting to the exit. If the Brexit vote serves as a wake-up call to fiscal policymakers in Europe, then this may help catalyze an ‘ever-closer union’ that survives this episode (somewhat redundantly and obviously, long-standing political institutions have to survive crises, otherwise they wouldn’t survive; the United States weathered the Civil War, for example).

In the meanwhile, don’t expect the market to settle down in the near-term, or really any time soon. What this means is that recent trends are likely to persist; it’s too early to catch the falling knife or attempt to be a hero. One such way to gain an edge is to monitor retail crowd positioning (analogous to commercial hedgers in the futures market), as the crowd has consistently been on the wrong side of these recent big moves. The fact that the retail crowd remains net-short EUR/USD and EUR/JPY is just another reason to maintain a high degree of skepticism towards the Euro in the near-term, beyond the understated political, economic, financial, and geopolitical implications of the historic Brexit vote. –CV