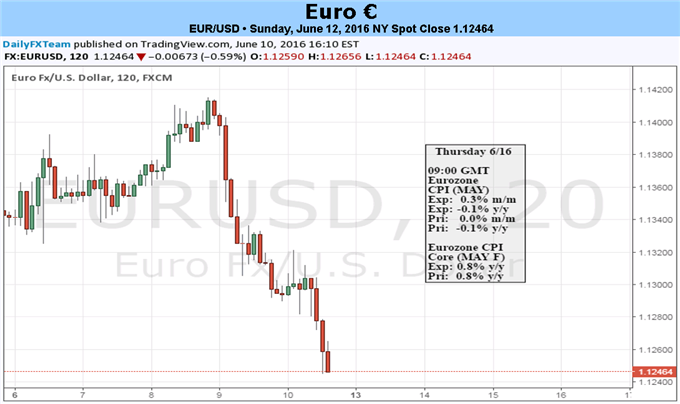 - Volatility is likely to remain higher (and possibly run higher) between now and June 23.

The Euro was weak across the board last week, gaining ground only against the beleaguered British Pound (EUR/GBP +0.79%) as Brexit tensions continued to rise. Even on advance to the June FOMC meeting, where it looks like the Federal Reserve will keep rates on hold, the US Dollar gained ground versus the Euro (EUR/USD -1.03%). With a number of recent polls showing that the ‘vote leave’ campaign is gaining momentum, volatility has risen in FX markets as investors have jettisoned the Sterling the past two weeks. Needless to say, the concerns are spilling over to the Euro.

The Brexit component for the Euro is clear: it raises the question of how permanent being a member of the European Union actually is. Who is to say that if the UK can’t change its membership, why couldn’t a peripheral country like Greece? Or a core country like Holland? The narrowing of the recent UK-EU referendum polls in the run up to the June 23 vote is increasing the probability of these questions from being answered – which would be to the Euro’s detriment.

There’s good reason to believe that the overhang of a potential Brexit is the main driver of Euro weakness in the near-term (aside from the rise of volatility in tandem): Euro-Zone economic data hasn’t been terrible. The Citi Economic Surprise Index for the Euro-Zone closed last week at -2.5; one month ago it was -7.4. Energy prices remain elevated, which should help inflation later this year and early next (although there’s been little corresponding reaction in the 5-year, 5-year inflation swaps, which had been tracking Brent Crude for much over the past two years – something to keep an eye on).

As a result of the more positive (less negative?) non-Brexit related Euro-centric developments, markets aren’t convinced that the European Central Bank is planning on easing again this year. Overnight index swaps are only pricing out 4.6-bps from the deposit rate by December, while 4.5-bps have been priced out of the main refinancing rate. Likewise, stability in the data has led to EONIA markets pricing in approximately 7-bps of rate cuts by December.

In other terms, this means that overnight index swaps markets are pricing in less than a 40% chance of cuts to the deposit and main refinancing rates. Assuming recent Euro weakness is brought on by Brexit fears, the UK will have to deliver a ‘leave’ resolution in order for the Euro to stay lower; otherwise market participants don’t appear to be setting up the Euro for long-term weakness. Even though much of the attention over the next few days will go to the US Dollar around the June 15 FOMC meeting and the British Pound around the June 23 UK-EU referendum, don’t forget the Euro – it will very much be at the center of the market action. –CV