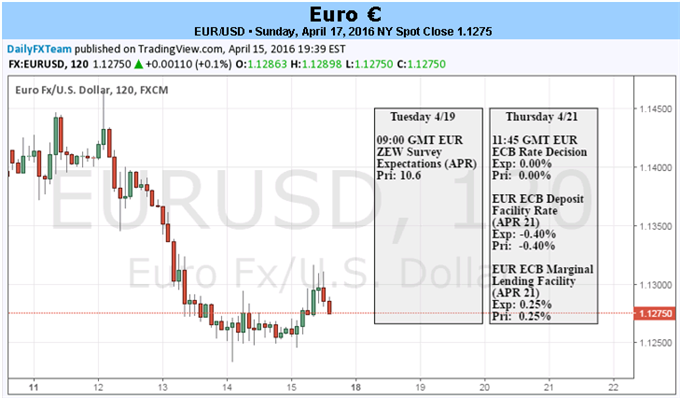 - If the ECB doesn’t comment on the EUR/USD exchange rate, it’s possible another small rally is in store.

The Euro took a step back last week as global equity markets rallied, and despite the proximity of the European Central Bank’s April policy meeting, the move was likely unrelated. The truth is, just like in January, we’re too close to the most recent shift in easing policies before the ECB is ready to declare the measures in effective yet. The expanded QE program kicked in on April 1 while the TLTROs have yet to, meaning their impact can’t be measured for a few months. As a result, with the ECB set to keep rates unchanged, traders should be focusing on President Mario Draghi’s press conference for clues as to what the central bank will do next.

As the ECB had previously declared that they were no longer targeting the FX channel, the Euro had been given some breathing room to rally against its peers. Yet the Euro’s strength may only be tolerated for so long. The ECB’s technical assumption for EUR/USD in 2016 is $1.0900; it closed last week just above $1.1200. Brent Oil, the energy input the ECB bases their inflation forecasts around, is forecast at $52.20 per barrel for 2016. Depending upon how you measure it, energy prices are underperforming the ECB’s forecast in the neighborhood of –19.4% (December 2016 futures contract close on Friday) to -22.1% (front month close on Friday).

A few more months of a stronger Euro, weaker energy prices, and persistent underperformance in inflation readings, and it’s easy to envision the ECB easing again this year. It’s just not going to be this week. Due to the fact that the ECB is one of many central banks that have fallen into a predictable pattern of when policy action is most likely to arrive – only when forecasts are updated – this means that June, September, or December will likely harken the next round of easing.

We know that the door for more action isn’t closed – the March ECB minutes revealed as much – but markets aren’t confident that new easing measures are coming anytime soon – likely at the end of Q4’16. EONIA rates markets are leaning towards a small rate cut by December (chart 1 below). There are 8-bps being priced out in December 2016 at present time. 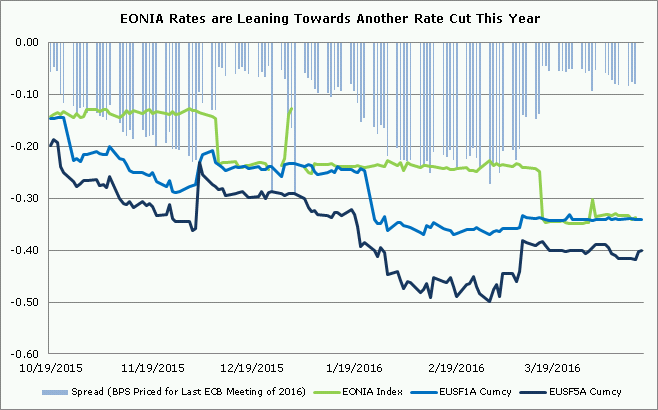 From another perspective, overnight index swaps, we can see that traders are currently eying October as the most likely period for when the ECB will cut its deposit rate again – there is a 54% implied probability (chart 2 below).

Given these data, and knowing that the ECB will likely wait (barring a crisis) for new staff projections before it acts again, December 2016 is our best estimate for when markets are currently pricing in the next round of ECB rate cuts.

The latent potential for a big Euro short covering move around a ‘disappointing’ ECB meeting seems less likely given recent shifts in positioning. According to the CFTC’s latest COT report, there were only 52.1K net-short contracts held by speculators in the futures market for the week ended April 12, the lowest level since the week ended February 23, and the third lowest level over the last 52-weeks overall. Accordingly, without explicit reference to the exchange rate, it seems the Euro’s sails won’t be blown about by the ECB this week.