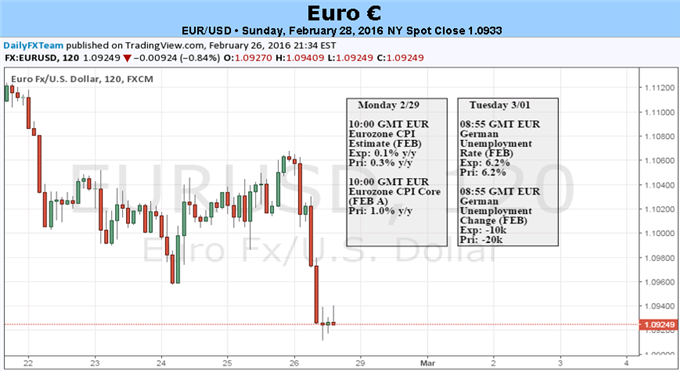 - Confirming our thesis set out on February 12 and February 14, the Euro has corrected its overextension.

- EONIA rates have barely moved since late-January, setting up for a volatile March 10 ECB meeting.

In what is increasingly feeling like a replay of market action in late-November 2015, the Euro was the second-worst performer overall, concurrently weighed on further by the ongoing developments in the ‘Brexit’ saga. As we’ve articulated over the past few days (and will be outlining in greater detail over the next several), the true cost of a UK exit from the European Union may ultimately be paid for by the Euro, not the British Pound. For now, this existential crisis is just starting to creep to the forefront of investors’ minds, but before that risk can be fully recognized (or realized), there is one significant hurdle in the way: the European Central Bank’s March 10 meeting.

For the past two-plus weeks, we’ve been casting doubt over the Euro’s rise (“don’t trust the Euro”), with our main thesis being that another 10-bps rate cut by the ECB – which is already priced-in – may not be enough to keep the Euro pinned lower (just like in December 2015). The moment of reckoning is coming, just not yet. The Euro’s lack of appeal in the current environment – one in which risk assets are finding a bit more levity – has been further compounded by the expectations of the ECB to do something in two weeks’ time. Euro-Zone inflation readings remain low (the next one is due on Monday – see the DailyFX economic calendar for details) – and the continued rut that commodities find themselves in is weighing on market participants’ faith in the ECB’s ability to deliver on its stated monetary policy goal: bringing headline inflation back to +2% y/y.

As the EUR/USD exchange rate has receded so quickly over the past three weeks – it closed as high as +3.87% higher the week of our report, “Further Euro Strength Suspect as Data Deteriorates; ECB Very Likely to Act,” - the ECB is no longer going to feel inclined to act with the same fervor. At $1.0933, EUR/USD closed last week just +0.31% above the ECB’s 2016 technical assumption for EUR/USD ($1.0900). 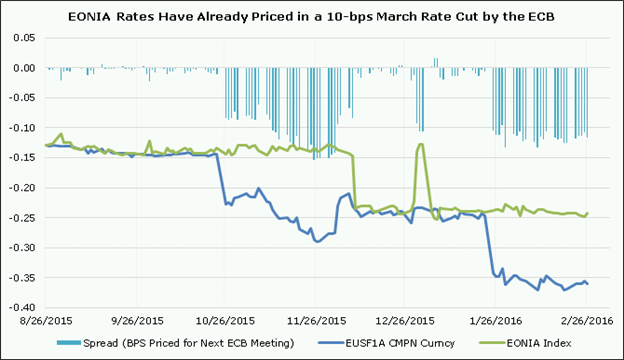 The 10-bps rate cut that’s currently being priced into markets is increasingly looking like the only major policy change that should be expected; having seen the reaction on December 3, 2015, a simple extension of the QE program again won’t satisfy market participants. What’s increasingly looking like a late-November/early-December 2015 redux, market participants are disinclined to drive the Euro higher with expectations for a rate cut so high and another round of staff forecasts are due.

Accordingly, we still don’t think there is a clear cut direction to look for the Euro to head in over the coming week, largely reflecting our neutral forecast for EUR/USD in Q1’16. Now that the Euro has depreciated on nearly a straight line over the past two-plus weeks, and that the EUR/USD exchange rate is back at the ECB’s 2016 technical assumption, traders may find reason to pause. If we’re in the middle of a late-November/early-December déjà vu, then sideways trading this week followed by another Euro rally after the ECB meeting seems like the course of action. “Buy the rumor, sell the news” as it pertains to the ECB’s upcoming 10-bps rate cut, if you will (more than that would surprise markets and negate this forecast). –CV