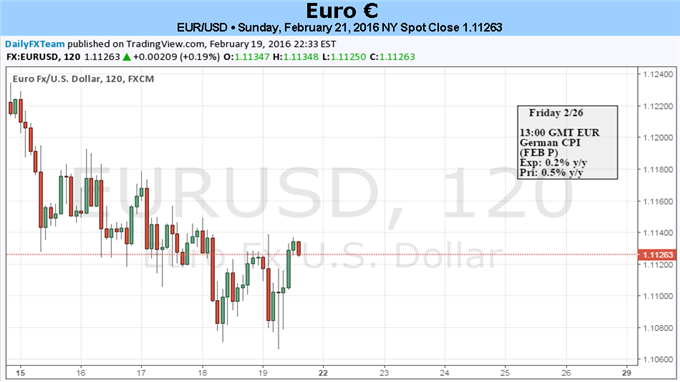 - Market participants seems confused by what to do with the Euro as longer-term concerns come into focus.

- Despite a soft week, the Euro is still the second-best performing major currency in 2016.

Now a few weeks removed from both the European Central Bank’s and the Federal Reserve’s January policy meetings, and with still several weeks until to the next ones, markets continue to be driven by excessive speculation over central banks’ easing policies and hang-wringing over the latest wave of negative news. Seemingly, the negative sentiment environment has benefited the Euro this year, as it is the second-best performing major currency thus far in 2016 (only next to the Japanese Yen).

Last week’s moderation in risk-correlated assets served as a check on the Euro’s advance; and the Euro’s decline was primed by a difficult environment for it to continuing appreciating in (read last week’s Euro weekly trading forecast, “Further Euro Strength Suspect as Data Deteriorates; ECB Very Likely to Act”).It appears that upcoming shifts in central bank policy – if it’s the Fed backing away from its projected rate hike pathor the ECB loosening monetary policy further – have been priced into the market. Yet conversely, as we outlined in our weekly forecast last week, another 10-bps rate cut by the ECB may not be enough to keep the Euro pinned lower (just like in December 2015). Yet this is an issue that will likely only become directly impactful on the ECB’s March 10 meeting.

Before then, in the very near-term, there is heightened risk to the Euro as the calendar is packed with medium- and high-ranked event risk on the horizon. Event-driven volatility – particularly between the hours of 09:30 GMT to 15:00 GMT – will be well-represented over the next two weeks, starting Monday.

On Monday, preliminary February PMI readings for France, Germany, and the broader Euro-Zone will be released, and in aggregate are expected to show a further moderation in growth momentum. On Tuesday, the final Q4’15 German GDP readings are due, while the more relevant February German IFO will also be released and are expected to offer a mixed outlook on the Euro-Zone’s largest economy.

Despite these early-week release, the Euro will likely be influenced by the late-week inflation data more than anything else on the economic calendar. As the core of the ECB’s sole tenet of monetary policy, incoming inflation data against a backdrop of markets anticipating a change in central bank policy should prove to be highly influential. On Thursday, the January Euro-Zone Consumer Price Index will be released, and is expected to show severe deflation month-over-month (-1.4% versus 0.0% prior) and another print sub-1% year-over-year (+0.4% versus +0.2% prior). Preliminary February German CPI figures released on Friday will show similar price developments.

If both shows signs of deflation and/or disinflation as expected, the Euro could easily head into the March ECB footing on weaker footing (or at least with difficulty moving higher). While the ECB looks at many measures, its preferred market measure of inflation, the 5-year, 5-yearinflation swap rate, closed last week at 1.430%, well-below the ECB’s medium-term inflation target of 2%. The week of the ECB’s December 2015 meeting – when it cut its deposit rate by 10-bps – this market measure of inflation was as high as 1.842%. With inflation expectations have declined so far and remaining so low, it should come as little surprise then that markets have already priced-in another 10-bps rate cut (chart 3).

Market positioning right now complicates the picture for the Euro, in particular for EUR/USD, which is why we’re maintaining our medium-term “neutral” forecast for the pair as we’ve done for Q1’16 to date. The repricing of the Fed’s rate hike timeline has been a significant detractor to the US Dollar, and in turn, we’ve seen market positioning square up through the first few weeks of 2016. As of the week ended February 16, speculators in the futures market held the fewest net-long US Dollar positions (via DXY) and the fewest net-short Euro positions through the year thus far. The conditions for a EUR/USD short covering rally are much weaker than they were at the start of this year.

The thematic tug-of-war in the Euro’s underlying fundamentals continues to play out. On the bull side, there’s ample reason to believe that the market has already priced in the ECB’s next move, which could lead to a disappointment-driven rally like in December. Before the March meeting, the bear case has gathered some momentum: economic data continues to weaken; inflation expectations have deteriorated further; financial conditions have tightened; and the fuel for a short covering rally in EUR/USD is running low. Gains by the Euro ahead of the ECB’s March meeting look like they will be more difficult to sustain barring another swell in negativity washed across the headlines. –CV