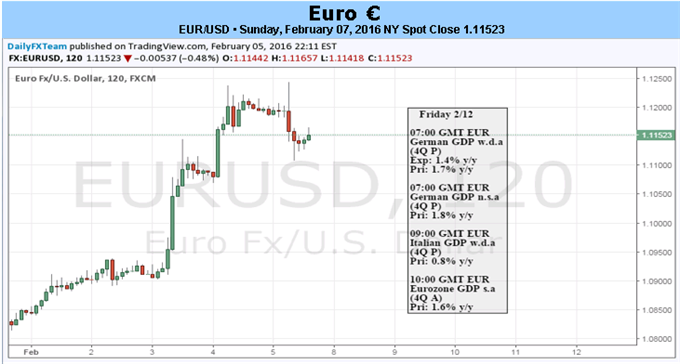 - EUR/USD jumped higher as markets priced out any Fed rate hikes this year.

The European Central Bank may now see that it has a problem on its hands. As soon as markets priced out the possibility of the Federal Reserve raising rates in 2016, EUR/USD immediately rallied. The underpinning of EUR/USD’s decline since May 2014 – diverging policy as the Fed looked to raise rates and the ECB looked to loosen policy further – seems to be in question. Yet now that EUR/USD has jumped back towards $1.1200, it’s time to reassess central bank policy on both sides of the pond.

First and foremost, it seems that markets are operating around the belief that major central banks will only act around policy meetings in which they were armed with revised economic forecasts to support their data revisions. The ECB is well-aware of this, which is why they chose to take on a more dovish stance in January. By doing so, they kept their credibility in check, with markets convinced that March remains a possible launching point for the next round of easier monetary policy.

Market participants will be intensely focused on what the ECB and the Fed will do next at their respective March policy meetings, the next time when either central banks update their respective economic forecasts. For the US Dollar side of the equation, there may be a bit of a floor forming in the rates market: Fed funds futures stopped pricing in a rate hike in 2016 for a time midweek last week, yet the Fed continues to beat the drum that it will be raising rates gradually this year. After a rather mixed (overall, slightly positive) US labor market report for January, any data that suggests the Fed will raise rates at least once before June this year will help insulate the greenback from further steep losses (unless recession risks increase further; the Atlanta Fed’s GDPNow tracker is suggesting quite the opposite as of February 7, 2016).

From the Euro's perspective, it’s important to consider why the ECB cut its deposit rate on December 3 – and did not make changes above what the markets had already priced in for the QE program. Financial conditions were not considered a headwind with the EUR/USD trading nearly -5% below the ECB’s EUR/USD NEER (nominal effective exchange rate, the technical assumption underpinning the ECB’s growth and inflation forecasts) at the time of the December meeting. The ECB deemed it wasn’t time to use its “bazooka,” and the Euro screamed higher.

However, the Euro exchange rate, particularly after this past week with the US Dollar’s breakdown, may once again prove to be unpalatable for ECB policymakers: 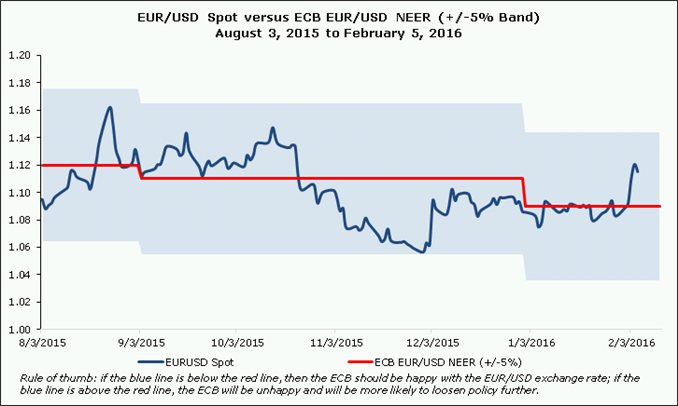 These observations lead us to believe that we’re starting to get into the territory where ECB policy officials may start to become a bit more vocal about the exchange rate. As we stated in our Q1’16 Euro quarterly forecast, we believe that, reflexively, a stronger EUR/USD has increased the probability of the ECB acting again in March.