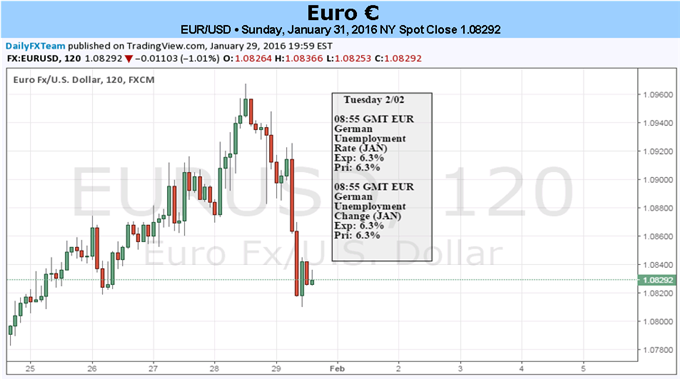 - EUR/USD slumped after the BOJ shocked and awed markets on Friday.

- Retail traders have proven fickle in EUR/USD, flipping positioning around $1.0900.

It was quite an interesting start to 2016 for the Euro, but not for EUR/USD; the pair opened the month at $1.0873, and closed the month at $1.0829. Instead, it were the EUR-crosses that warrant our attention one month into the year, and that’s largely thanks to the ongoing and increasing reliance that markets have on central banks. With commodity prices falling precipitously and equity markets sliding globally, the Euro has been able to thus far post sizeable gains versus currencies particularly sensitive to energy markets, like the Australian Dollar, the Canadian Dollar, and the Norwegian Krone.

In part, global concerns have originated with the People’s Bank of China, whose policy attempts to decouple the Chinese Yuan from the US Dollar as the Federal Reserve raises rates have stoked global fears of a ‘hard landing.’ in the world’s second largest economy. In response to the resulting volatility across financial markets, a number of central banks - including the European Central Bank - stepped up their threats of more stimulus. Yet it was the Bank of Japan’s shocking policy move on Friday that may have the most profound impact on markets yet.

A number of central banks have entertained negative rates for a number of years, so the development is not entirely unique. In 2012, the Danmarks Nationalbank dropped its deposit rate into negative territory. In 2014, both the ECB and the Swiss National Bank cut rates into negative territory. The Swedish Riksbank followed up with its own negative rate policy in 2015. What was mainly a pan-European experiment - one which many feared would result in hyperinflation but has not (yet?) - is now being embraced by the central bank with arguably the most to lose.

Japan carries the world’s highest debt-to-GDP ratio at 230% (as of the end of 2014), and the BOJ is currently on pace to own 50% of all outstanding JGBs by July 2018. If the BOJ loses control of its policy and thus interest rates (an amplified 2003/2010-like VaR shock), Japan - the world’s third largest economy with a rapidly aging population - will be facing a very, very serious issue.

In the very short-term, the shocking BOJ decision, in context of the ECB hinting at more stimulus when it changes its forecasts in March and the Federal Reserve beginning to question its projection path of rate hikes, could prove to be a strong enough nudge to lift global sentiment. The rally by equity markets across the globe on Friday wiped out a significant amount of the losses accumulated through January, which was on course to be one of the worst months ever to start a year (and was for a number of indexes). The Euro may get swept up in this via the crosses, as the higher yielding currencies and commodity-sensitive currencies get a lift. EUR/AUD and EUR/CAD, and even EUR/USD, would suffer in a more risk-seeking environment.

Longer-term, the BOJ’s actions could have significant collateral damage to broader market sentiment. Given the PBOC’s lack of deference to the Chinese Yuan exchange rate in recent months - especially since August 2015 - it seems highly skeptical that the Chinese central bank will allow its currency to appreciate to sharply against one of its main regional manufacturing competitors, particularly Japan, a country that it’s not exactly on friendly geopolitical terms with. As the tape has read for nearly the past six months, should the Chinese Yuan weaken, the US Dollar would likely gain broadly; commodity prices would be pushed further down; short-term yields would rise provoking flattening yield curves in developed economies.’ ‘Risk-off’ moves would be apparent globally, with several of the EUR-crosses front and center.