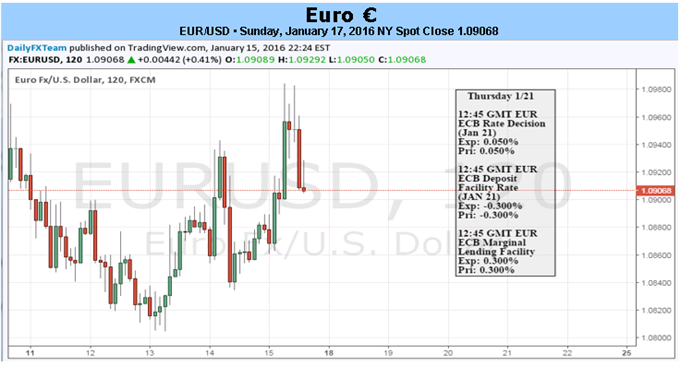 - Retail traders remain on the opposite side of the recent trend in EUR/USD.

- EUR/USD hasn’t been conforming to the USDOLLAR Index’s breakout attempt.

- As volatility increases across FX markets, it’s a good time for traders to reacquaint themselves with risk management principles.

As the global equities rout rolled into the ides of January, the Euro’s broad appeal has remained. The second full week of the year resembled the first one, with the Euro outpacing the commodity currencies and the British Pound, while the Japanese Yen and the US Dollar benefited from the risk off nature of financial markets. Since the start of the year, EUR/AUD has rallied by +6.26%, EUR/NZD by +5.86%, EUR/CAD by +5.30, and EUR/GBP by +3.72%. EUR/GBP is particularly intriguing at present time as it may be in the process of carving out a major bottom.

Unsurprisingly, as the Euro has gained, thanks to the “portfolio channelrebalancing effect,” equity markets have slipped; this relationship should be sustained over the near-term. We’ve previously speculated that the otherwise large net-short Euro position in the futures market should help buoy the Euro, and indeed, as shorts have been covered, the Euro has stayed elevated. During the week ended January 12, 2016, non-commercial traders in the futures market held 145.5K net-short contracts, a reduction from the 160.6K level observed during the prior week. While positioning isn’t as extreme as it was at its all-time high in March 2015, when non-commercial traders held 226.6K net-short contracts, there is still a significant enough net-short position that it may insulate the Euro if global equities remain under turmoil.

Unfortunately for the Euro, the appeal it has in the current environment in the short-term may ultimately be negated by the longer-term thematic influence of the European Central Bank’s ultra-loose monetary policy. There will be calls for action this week, no doubt (and for good reason). The elephant in the room – the ongoing slide in commodity prices – remains. Brent Oil, the energy input the ECB bases their inflation forecasts around, is forecast at $52.20 per barrel for 2016. Depending upon how you measure it, energy prices are underperforming the ECB’s forecast in the neighborhood of –32.9% (December 2016 futures contract close on Friday) to -44.6% (spot close on Friday).

Nevertheless, it appears rather unlikely that the ECB will act again this week. The ECB typically allows a period of time to pass between policy enhancements, so as to be able to measure the impact of prior policies. The deposit rate cut was just made in December, and there is still a long way to go under the ECB’s current QE program (though the goal posts could easily be changed again over the coming months). The expanded asset purchase program (APP) is only partly implemented at this point, with approximately €592 billion of purchases, or about 39.5% of the €1.5 trillion expansion.

Perhaps more importantly, the ECB is one of many central banks have fallen into a predictable pattern of when policy action is most likely to arrive: only when forecasts are updated. Thus, the risks to the ECB’s inflation forecast should have President Draghi and the Governing Council keeping markets focused on March, when the ECB will update its forecasts for 2016 and beyond.

Accordingly, we still don’t think there is a clear cut direction to look for the Euro to head in over the coming week, largely reflecting our neutral forecast for EUR/USD in Q1’16. Any perceived benefit the Euro may be receiving as a result of global markets under pressure could be balanced out by the ECB’s desire to intervene to support the Euro-Zone economy. As is typically the case, in the run-up to Thursday’s ECB meeting, economic releases may carry little weight; even the inflation data due this week are just revisions of prior releases. –CV